Despite the criticism and call for Ishant Sharma's ouster for conceding 30 runs in an over, teammate Suresh Raina on Tuesday, dropped hints that the beleaguered pacer could be retained in the fourth ODI against Australia at the JSCA Stadium in Ranchi on Wednesday. 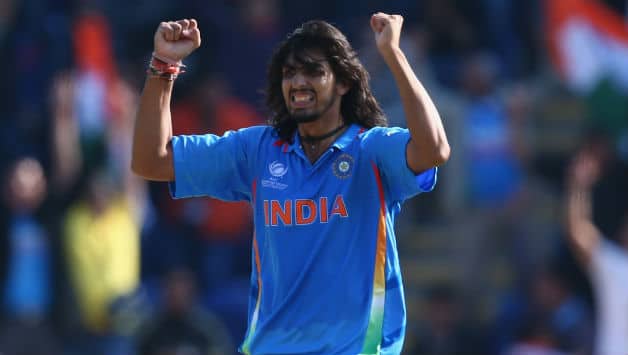 Despite the criticism and call for Ishant Sharma‘s ouster for conceding 30 runs in an over, teammate Suresh Raina on Tuesday, dropped hints that the beleaguered pacer could be retained in the fourth ODI against Australia at the JSCA Stadium in Ranchi on Wednesday.

Raina said Ishant had worked really hard in the last couple of days to overcome the disastrous 48th over in Mohali that cost India the third one-dayer as Aussies took a 2-1 lead.

“I hope Ishant would be strong in his mindset and approach the match in a positive manner. He has really worked hard in the last two days,” Raina told reporters on Tuesday.

“Our bowlers are doing well. Our think tank is strong and have good planning. Bowlers are training hard for last two days. The harder they work the better they would perform.

Hopefully we will do really well against the Aussies tomorrow,” he said.

Admitting that adjusting to the new ODI rules was proving difficult for the bowlers, he said: “We are not getting the ball to reverse, while spinners are also not getting turns as with two balls it do not get old. But we have no excuse. We have to do well under the circumstances.

“We have to admit that it’s tough for the bowlers. When five players are inside (the circle), it’s obviously going to be difficult for the part-timers as your regular bowlers are not doing well.

“Bowlers come under pressure as to what line and length they would have to try when five players are inside. You’re allowed to bowl two bouncers but then you have to bowl four more balls after that.”

Raina however said they would have to live up to the challenge laid out by the ICC.

“No complains, as we have to play under the ICC Playing Conditions. Players will have to do their job.”

Asked whether 15-20 runs per over had become a norm, he said: “The players are used to the Indian bowlers after six IPLs. There’s positive as well as negative aspect to it. There is more pressure on the bowlers nowadays.”

Despite trailing the series 1-2, Raina said India were not under any pressure.

“We won the first match in the Pune T20. Then they won and we did in the next. It’s been a good contest so far. Our batting is clicking and sometimes bowling. The team who play well on that given day would win. It’s about your aura in the field and the mental toughness.”

He further said their seven-wicket win against England in the last match on January 19 would inspire them to do well here.

“We have done well against England in the last match here. Definitely we would try to do well here. Just hope that it will be our day tomorrow.”

Raina is seen as the No 4 batsman in Dhoni’s envisage for the World Cup 2015 and the 26-year-old said he was enjoying batting at the key position.

“I’ve played many matches at No 4 and 6. I had a top edge in the last match but I’m batting well and feeling fine and positive. The No 4 spot belongs to me in the upcoming matches and I hope I do well,” he added.

But he said the World Cup is still a long way to go and they were looking forward to winning tomorrow’s match.

“We can’t say what would happen after two days or weeks. Our main focus now is to beat Australia. It’s a long way to go. Tomorrow’s match is more important and we are getting ready for it. It’s about taking one match at a time.”

Asked whether he considers Dhoni as his role model, Raina said: “He has been batting well over the years. I’ve learnt a lot from him and Yuvraj Singh. He’s a finisher in ODI and T20 cricket.”

“That’s Mahi’s exclusive. He has specialised on that and it suits him only. It’s amazing the way he clears the ball with his full strength… It’s amazing. He has practised a lot. We have our gameplan. We just have to stay positive.”

In a lighter vein he further said they might have a dinner at Dhoni’s residence on Wednesday. “We may have dinner tomorrow at Mahi bhai’s residence. There is nothing special apart from that.”

Australia’s leading bowler Mitchell Johnson is troubling the Indians with his sheer pace and bounce but Raina said: “No doubt, he is bowling well. But our planning is equally good against him. We have to do well especially in the middle order. Myself, Yuvi bhai and [Ravindra] Jadeja would have to do well.”

Raina further said it would be a dream come true for him if he could make a comeback in Sachin Tendulkar’s farewell two- Test series against the West Indies next month.

“Personally for me the next four ODIs are very important as I’ve to make a comeback into the Test squad. It [Tendulkar’s 200th] will be a dream Test for me whether I play or not. He is world’s No 1 batsman and more importantly a good human being. It will be a sad moment for all of us. It’s a very important moment for his family. I hope he scores centuries in both of his last two Tests,” he signed off.