Unfazed by the Test debacle as he was not a part of the team, Indian middle-order batsman Suresh Raina on Monday said his side will play some "different cricket" to give a better account of itself in the shorter formats starting with a Twenty20 match against Australia on Wednesday. 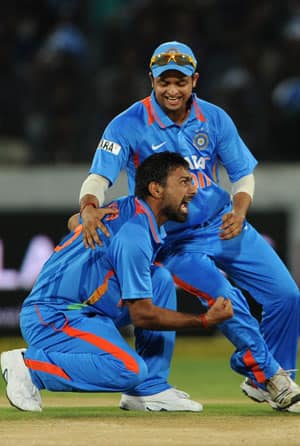 Unfazed by the Test debacle as he was not a part of the team, Indian middle-order batsman Suresh Raina on Monday said his side will play some “different cricket” to give a better account of itself in the shorter formats starting with a Twenty20 match against Australia on Wednesday.

“We won the ODI series here last time. We have also won the World Cup. We won other series too. It’s the same set of players largely. You would see different cricket from India,” said Raina.

India’s disappointing show in the Test series would have little effect on a largely young team in coloured clothing and Raina took pains to stress the point.

“Test matches were different. I was not part of it but what I watched, Australians played better cricket. They executed their plans well, bowled well, bowled in good areas.

Unfortunately, we didn’t bat well in pair. Hopefully, we will do well in next series.”

Raina’s confidence stems from the fact that most of the youngsters, including himself, have prepared well for the forthcoming series.

“The youngsters have done well in the last couple of months. So we hope for the best. There are a lot of youngsters who have come from India. They have played good first-class cricket and done very well at home. I played three four domestic matches and got a double century,” he said.

Raina believes the present tour would be useful for the youngsters as the next world cup, in 2015, is scheduled in Australia and New Zealand.

“We will play 2015 world cup in Australia and New Zealand and the same youngsters would benefit a great deal,” Raina said.

Raina said Australia should watch out for the young Indians and not bloat on their Test success too much.

“We would play good cricket against Australia and Sri Lanka. It would be good if we can keep our intensity up. The boys are motivated. Unfortunately, we didn’t do well in Test but are passionate to do well in the forthcoming one-day series.

“Twenty20 would be lot different from Tests. We beat Australia in quarter-finals in the World Cup and also are world champions,” he said.

“I went to the National Cricket Academy in Bangalore, worked in Mumbai, worked on my wrist position on the bouncy wicket at MIG and NCA and had good coaches (to work under). I worked with Sandeep Patil. We have Duncan (Fletcher) here.

Sachin (Tendulkar) played with us in CB series last time. His inputs would be very useful.”

India lately has not done well in Twenty20 internationals, be it bilateral or a big event such as the Twenty20 World Cup even though the inaugural world title went to Mahendra Singh Dhoni”s men in 2007.

In the ICC rankings, they are presently number seven, just ahead of the West Indies.

“We have to do well. Fielding is going to be a major factor here. We have to take catches and effect run-outs. We have to bat till the end.

“We have good all-rounders who can hit the ball hard and take wickets. We have good variation bowlers like Praveen, Irfan and Vinay. Hopefully, you would see an improved performance.”

The spunky youngster is hopeful a good show in Australia would pave way for his return in Test cricket.

“I played here against Australia A and South Africa A sides. I have done well. In Test cricket, I did well in the West Indies.

“I did well in 15 matches though I didn’t do well in England. But I know I can play many more Test matches. I do believe in hard work and when given chance again, would prove my worth.”