Suresh Raina and his wife Priyanka are still expecting their first child. The Gujarat Lions captain will miss his first match of the Indian Premier League as his GL team get ready to face RCB in match no. 44 of the current season. Earlier reports of Raina becoming a daddy to a girl child were false and part of rumor. Raina sent out a tweet to his followers on Twitter saying – ” Still waiting…#BabyOnTheWay #HardToWait”. The tweet by the Indian cricketer cleared all the rumors and doubts about the birth of Raina’s first child. Going by the tweet though, Raina is very excited about the fact that he is going to become a father soon. Raina also posted a picture along with wife Priyanka on Instagram. LIVE CRICKET SCORECARD: Royal Challengers Bangalore  vs  Gujarat Lions , Live Score, 44th T20 Match, IPL 2016

His Gujarat Lions teammate Dale Steyn praised his skipper on his commitment for the team. “Captain Suresh is in Amsterdam for the birth of his first child as I write this, but is still scheduled to be back in time for Saturday’s game which is an epic commitment,” he said. LIVE CRICKET UPDATES: Royal Challengers Bangalore (RCB) vs Gujarat Lions (GL), IPL 2016, Match 44 at Bengaluru

The Uttar Pradesh cricketer married Priyanka Chaudhary in Delhi on April 3 2015 and gave the good news just before leaving to play in the IPL.

Earlier, Raina had said “I have already redone the homes at Holland and Delhi. Right from baby clothes to cots, prams, posters and wallpapers, I have done up both the homes in such a way that Priyanka and the baby will be completely at ease. After the delivery, both of them will travel to India and my whole effort is to ensure their comfort.” 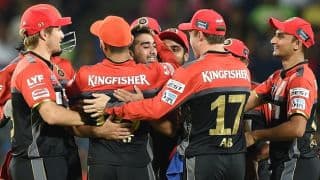 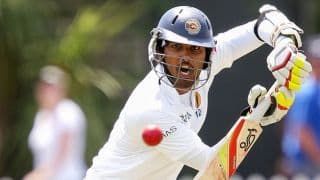