Suresh Raina also says that he is well versed with the Rajkot surroundings.

Rajkot: They were inseparable during their eight seasons for the Chennai Super Kings (CSK) but Suresh Raina will now be plotting Mahendra Singh Dhoni‘s downfall when Team Rajkot will face Team Pune in the ninth edition of Indian Premier League (IPL). Asked about his feelings, Raina said they would be competitive but at the same time would not lack “sportsman spirit” when pitted against his former IPL captain. For the dashing left-hander, familiarity with Rajkot conditions will be an asset. “I am very much familiar with the condition of Rajkot as I have played many matches in junior category like U-16 and U-19,” the 29-year-old left-handed batsman told reporters READ: Raina, Jadeja, McCullum, Faulkner, Bravo: Rajkot choose glamour over utility in IPL 2016

When asked about his India and CSK teammate Ravindra Jadeja, who has also been picked up by Rajkot, Raina said,”Jadeja is a local boy. Both of us are familiar with conditions here and we will use this to our advantage”. The next edition of the IPL will be held from April 9 to May 29 with the opening and the final match in Mumbai. READ: Suresh Raina, Ravindra Jadeja, Brendon McCullum among players picked by Rajkot

Along with Raina and Jadeja, Brendon McCullum, Dwayne Bravo and New Zealand skipper McCullum too have been snapped up by Rajkot. Raina is believed to be one of the favourites to lead the team, although it will not be much of a surprise if the captaincy is handed over to McCullum. Raina played for CSK ever since the inception of the IPL and was the leading run-scorer for the franchise, before it was banned. His captain from CSK Dhoni was snapped up by the Pune team. READ: Suresh Raina favourite to lead Rajkot franchise in IPL 2016 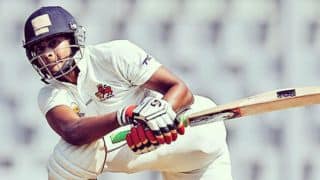