Surrey are top of Division One with 173 points, 32 clear of Somerset at second place.

Division One leaders Surrey have been given a shot in the arm as they aim to win the County Championship with news that South African Test opener Dean Elgar is available for selection in the club s next match against Nottinghamshire on Wednesday.

Elgar, ranked ninth in the ICC Test batsmen ratings, has returned after playing for South Africa in Sri Lanka, and takes the place of Aaron Finch as Surrey s overseas signing. The 31-year-old played Surrey s first three matches of the County Championships season, scoring 173 runs at an average of 34.60, before leaving for his international commitments.

Surrey are top of Division One with 173 points, 32 clear of Somerset at second place. They have won their last six matches.

The club will be without Sam Curran and Ollie Pope, the 20-year-olds who are part of England s Test squad to face India at Southampton from Thursday. 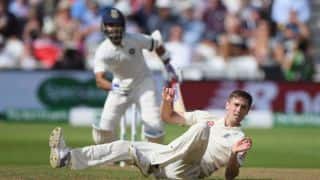