Rajasthan Royals (RR) batter Riyan Parag invited harsh criticism after he gave the veteran spinner R Ashwin a death scare following a run-out in the Qualifier 1 against Gujarat Titans (GT). The fans believed that the youngster should have controlled his emotions and respected the senior player irrespective of the outcome.

Soon after the incident, star Mumbai Indians (MI) batter Suryakumar Yadav sparked a controversy with his tweet. Yadav praised Riyan Parag for his attitude on the field. The tweet did not go down well with the Twitterverse who trolled him for supporting Parag’s aggressive behaviour.

Riyan Parag has been under the scanner of the fans for his over-aggressive attitude on the field. During the match against Lucknow Super Giants (LSG), fans called out Parag when he tried to mock the third umpire with his gesture. Parag had caught Marcus Stoinis earlier in the game but the third umpire felt that the ball had touched the ground and ruled the decision in favour of the batter. Thus, when Parag got a second opportunity to catch Stoinis, he ensured that he expresses his discontent at the earlier decision to the third umpire.

Meanwhile, Suryakumar Yadav has clarified his tweet on Parag. Yadav revealed that his earlier tweet on Parag was for his electrifying fielding on the ground and not for his antics.

Rajasthan Royals lost the match as GT qualified for the final. The Sanju Samson-led side will now take on RCB in the Qualifier 2 and the winner of the game will face GT in the summit clash. RCB booked their berth in Qualifier 2 after beating LSG in the Eliminator. 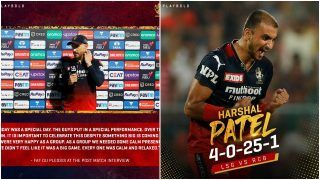 IPL 2022: RCB Skipper Faf du Plessis Compares Harshal Patel To Joker In Pack Of Cards After Win Against vs LSG