Suryakumar Yadav departs as KKR need 48 from 25 vs SRH

Suryakumar Yadav departs as KKR need 48 from 25 vs SRH

Suryakumar Yadav departed on 23 with Kolkata Knight Riders requiring more 48 runs to qualify in for eliminator 2 in IPL 2016.

Kolkata Knight Riders (KKR) lost their key batsmen Suryakumar Yadav against Sunrisers Hyderabad (SRH) in Indian Premier League (IPL) 2016.  The KKR face off against SRH in eliminator 1 of IPL 9 at Feroz Shah Kotla in Delhi. Suryakumar Yadav came into bat after the wicket of Yusuf Pathan. Yadav added 23 runs from just 19 balls. Yadav got out with KKR needing 48 runs from 25 balls. Yadav in a bid to hit big gave away his wicket to Moises Henriques who had him caught by Shikhar Dhawan at mid-wicket region. KKR had Manish Pandey and R Satish in the middle with Jason Holder the only other recognised batsmen to come after them.  LIVE CRICKET SCORECARD: Sunrisers Hyderabad (SRH) vs Kolkata Knight Riders (KKR), IPL 2016 Eliminator, at New Delhi

Gautam Gambhir and Yusuf Pathan were dismissed in quick succession, as the former IPL champions KKR stuttered in their chase of 163 against Sunrisers Hyderabad SRH. While Gambhir was dismissed for run-a-ball 28, Pathan could manage only 2 off the 6 balls he faced. The wicket of Pathan was a big blow in particular, as he has been in terrific form. Barinder Sran provided SRH the first breakthrough in their IPL 2016 Eliminator against Kolkata Knight Riders KKR, when he removed the dangerous Robin Uthappa in the second over. Uthappa faced 7 balls and struck 1 boundary to score 11. Colin Munro was run out by Yuvraj Singh for 16.

The winner of the game will face Gujarat Lions (GL) in the Qualifier 2 of IPL 9, which will be played at the Feroz Shah Kotla Stadium in New Delhi on Friday. 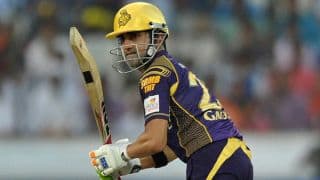 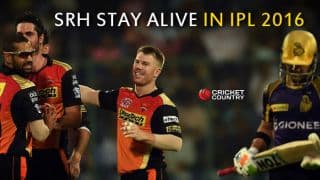