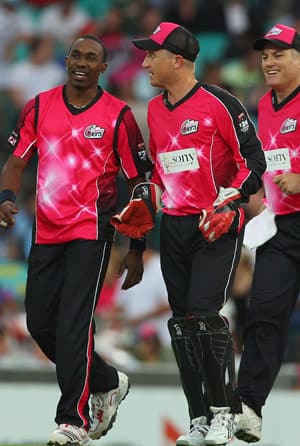 Stars’ number ten batsman Clint McKay had the chance to be a hero by hitting Brett Lee for four from the final ball to win the match but could only manage a single.

The Stars needed 15 from the last over and had given themselves a golden chance after hitting two boundaries early on, to bring the target down to five off two, but experienced Lee held his nerves to give Sixers a memorable win.

West Indian all-rounder Dwayne Bravo gave the home team a solid start after they elected to bat, scoring 52 off 39 balls. Quick-fire innings from Ben Rohrer (29) and Dominic Thornely (29) took the Sixers to a total of 166 for nine.

Stars, in their reply, failed to grasp opportunities as they shot themselves in the foot, thanks to some silly running between the wickets.

Run-outs of David Hussey (42) and Adam Voges (31) proved to be the downfall of Stars. Leg Spinner Steven Smith starred with the ball in front of a boisterous 27,590 home fans, taking two-wickets and giving away just 29-runs off four overs.(IANS)