Raina hit a fluent 47-ball 56 inclusive of five fours and two sixes for Uttar Pradesh; his third successive fifty in the competition.

Kolkata: Suresh Raina continued his imperious form with a third successive half century as Uttar Pradesh kept their final hopes alive with a resounding seven- wicket win over Baroda in the Syed Mushtaq Ali T20 Trophy today. Chasing a stiff 193 after they opted to field, Uttar Pradesh were in trouble with 0/1 in the first ball but Raina and opener Umang Sharma made it easy in the end with a match- winning 160-run partnership off 90 balls.

Raina hit a fluent 47-ball 56 inclusive of five fours and two sixes while Sharma smashed a career best 95 off 47 balls. Five runs shy of a century, Sharma edged Atit Sheth behind the stumps as he along with Raina got out in space of six balls with 33 needed off 24, but Rinku Singh applied the finishing touches with an unbeaten 26 off 11 (4×4).

Uttar Pradesh thus returned to winning ways after their five-wicket reversal against Tamil Nadu at the Eden Gardens yesterday. They now have two wins from three matches.

With eight points from three matches each, Delhi and Uttar Pradesh will clash in a virtual semifinal tomorrow to determine the finalist from Group B.

In the second match of the day at the Jadavpur University second campus ground in Saltlake, Bengal finished their campaign with an easy seven-wicket win over Tamil Nadu.

Kanishk Seth (3/26) was the pick of Bengal’s attack, while Sayan Ghosh and Aamir Gani claimed two wickets each as they restricted Tamil Nadu to 129/9 after they opted to bat. Sudip Chatterjee (51 not out from 47 balls; 6×4) struck a second successive half-century to seal the chase with 22 balls to spare. Writtick Chatterjee gave him a fine support with 44 from 32 balls (5×4). 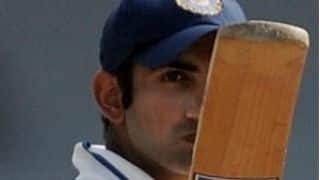