Baroda have now won both the matches in the tournament so far.

Vadodra: Baroda eked out a hard-fought nine-runs win over Railways to register their second win in the Syed Mushtaq Ali Twenty20 tournament on Sunday. Opting to bat, Baroda rode on Hardik Pandya’s 44-ball 54 and Yusuf Pathan’s run-a-ball 41 to score 142 for the loss of five wickets. Ranjit Mali picked up two wickets for Railways, giving away 21 euns. Chasing the target, Birendra Vivek Singh struck a 43-ball 46 but that was not enough to take Railways over the line as they finished on 133 for the loss of six wickets. Deepak Hooda was the pick of the bowler for Baroda, scalping three wickets for 23 runs. Full updates: Syed Mushtaq Ali Trophy 2015-16, Mah vs Ser, HP vs Hyd, And vs Del, Bar vs Rail, Jha vs Tri, Ker vs Raj

Irfan Pathan, who was the star for Baroda in the previous match managed to pick up just one wicket. Pathan’s wickets included all top-order batsmen. In fact, he has dismissed five batsmen from the top six and that will give him a lot of confidence. Pandey om the other hand, struck in the third over of the match, again dismissing all top-order batsmen. Pathan last played an international match for India in 2012, which was a T20 International (T20I) against South Africa in the T20 World Cup at Colombo. A good perforance in this tournament could get him back in contention for the ICC World T20 2016, which will be played in Indian from March. Pathan was just a coiuple days back named skipper of the Baroda side for the tournament. 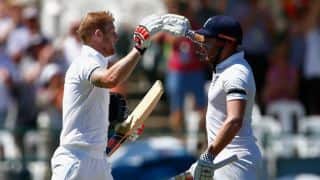