Bengal pipped Himachal Pradesh by 2 runs in a group A encounter of the Syed Mushtaq Ali Trophy T20 tournament on Monday.

Nagpur: Stand-in captain Ashok Dinda bowled a brilliant 19th over as Bengal pipped Himachal Pradesh by 2 runs in a group A encounter of the Syed Mushtaq Ali Trophy T20 tournament on Monday. Batting first, Bengal posted a 154 for six in 20 overs with Pramod Chandila smashing 70 off 39 balls that included nine boundaries and two sixes. Sudip Chatterjee contributed 42 off 39 balls. In reply, Bengal bowlers led by Dinda managed to restrict Himachal to 152 for three after 20 overs. Dinda had figures of 4-0-8-0 to show for his efforts. After 18 overs, Himachal were cruising along at 138 for three after 18 overs as they required 17 off the final two overs. Live Cricket Updates, Syed Mushtaq Ali Trophy 2015-16

Skipper Dinda gave only two runs off six deliveries as Nikhil Gangta could not dig out four consecutive deliveries bowled in the blockhole. Needing 15 off the last over, Prashant Chopra (71 no) managed 12 runs off rookie pacer Alok Pratap Singh’s (2/28) over. “Ashok Dinda was amazing today. He was unplayable in the 19th over when HP had 7 wickets in hand. He bowled six yorker length deliveries in the 19th over,” Bengal’s bowling coach Ranadeb Bose said after the match. Bengal now have 8 points after 3 matches and have a chance of qualifying for the knock-out stages. Pragyan Ojha sustained a bruised shoulder and was taken for a precautionary MRI. 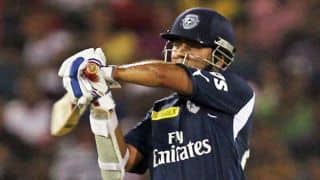