Gujarat will be disappointed with this performance especially after winning the VIjay Hazare Trophy recently.

Nagpur: Opener Prashant Chopra smashed an unbeaten 89 to lead Himachal Pradesh to a comfortable five-wicket win over Gujarat in a Mushtaq Ali Trophy Group A match on Saturday.  Set a decent 152 to win, Himachal Pradesh overhauled the target with three balls to spare with five wickets in hands. Chopra’s 89 came off 62 balls with seven fours and two sixes after his side had lost other opener Ankush Bains in the very first ball of the chase. With Paras Dogra (36), Chopra raised a 90-run stand for the third wicket and that proved crucial in the outcome of the match. Gujarat owed their total of 151 for 6 to combined batting effort of Rujul Bhatt (40), skipper Parthiv Patel (35) and Priyank Panchal (32) after being asked to bat. Full updates: Syed Mushtaq Ali Trophy 2015-16, Bengal vs Hyderabad, Gujarat vs Himachal Pradesh, Rajasthan vs Punjab, Andhra vs Madhya Pradesh, Mumbai vs Odisha, Maharashtra vs Uttar Pradesh

This will be a big setback for Gujarat as they would have gone into the tournament full of confidence having won the Vijay Hazare Trophy 2015-16 recently. Parthiv scored his first-ever List A century in the final and helped Gujarat lift the title. Gujarat are also the defending champions in Syed Mustaq Ali Trophy, having beaten Punjab in the final last year.

In the final of the Vijay Hazare Trophy 2015-16 Parthiv  powered Gujarat to 273 for nine before their medium pacers RP Singh and Jasprit Bumrah brought the star-studded Delhi batting to its knees, dismissing the 2013-14 winners for 134 in 32.3 overs. 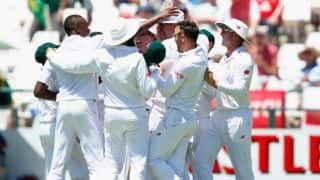