Saurabh Tiwary powered Jharkhand to an eight-wicket win over Rajasthan in a Group B T20 match of the Syed Mushtaq Ali Trophy.

Kochi: A superb four-wicket haul by young left-arm seamer Vikas Singh and a blistering unbeaten fifty from Saurabh Tiwary powered Jharkhand to an eight-wicket win over Rajasthan in a Group B T20 match of the Syed Mushtaq Ali Trophy on Monday. In a thrilling match that went down to the wires, Jharkhand first restricted Rajasthan to 120 for nine in their stipulated 20 overs, courtesy some fine bowling by 21-year-old Vikash. He was supported well by Monu Kumar (1/25), PN Seet (1/17) and Kaushal Singh (1/6). Jharkhand then returned to overhaul the target only in the second last ball of their innings with Tiwary smashing an unbeaten 43-ball 61 which was studded with one four and three sixes and Sumit Kumar scoring 38 in 50 balls with two fours. Live Cricket Updates, Syed Mushtaq Ali Trophy 2015-16

Earlier, Rajasthan skipper Pankaj Singh’s decision to bat at the Nehru Stadium backfired as they lost half their side in 7.2 overs with 40 on board. However, Dishant Yagnik (30) and Chandrapal Singh (40) shared 59 runs then after the fall of Ashok Menaria (24) in the 12th over to give Rajasthan a respectable score to defend. Chasing 121 to win, Jharkhand found themselves in a spot of bother with they were reduced to 18 for two in 5.4 overs but Sumit and Saurabh then took the onus on themselves and romped home with just one ball to spare. For Rajasthan, Nathu Singh snapped two wickets. 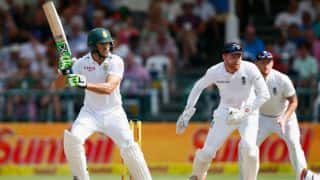