Kerala' Sanju Samson played a blistering 52 ball 72 to lead his team into the quarterfinals of Syed Mushtaq Ali Trophy 2015-16.

Kochi: Sanju Samson smashed 72 off 56 balls as Kerala completed a five wicket win over Punjab to cruise into the quarterfinals of the Syed Mushtaq Ali Trophy. Yuvraj Singh (54 off 44) took Punjab to 135 for 7 before Samson stole the show to lead Kerala to their fifth win in as many games. Punjab are still in hunt for a quarterfinals with a game to go tomorrow. They have 12 points from three wins in five games and are placed fourth in Group B behind runaway leaders Kerala (20 points), second placed Jharkhand (16 points) and Saurashtra, who are also on 12 points but have better net run rate.  Live Cricket Score, Syed Mushtaq Ali Trophy 2015-16Top two teams from each of the four groups qualify for the quarterfinals. Yuvraj’s half century was timely ahead of the T20s in Australia. He hammered seven fours and a six though it was not enough for a positive outcome for Punjab. Sanju on the other hand was in sparkling form and struck six fours and three sixes in what was a highly entertaining innings. Punjab captain Harbhajan Singh had a decent outing with the ball, taking two wickets for 19 runs in four overs. ALSO READ: Syed Mushtaq Ali Trophy 2015-16: Baroda manage extract victory from jaws of defeat against Andhra Pradesh
In the last match Kerala played, Rohan Prem struck a fine fifty before the bowlers made their presence felt to help Keralaoutplay Saurashtra by 50 runs in the Group B Twenty20 cricket match of the Syed Mushtaq Ali Trophy on Wednesday. Put into bat at the St. Paul’s College Ground, Kerala rode on Prem’s quick fire 56 to post a challenging 165 for nine in 20 overs and then the bowlers joined forces to restrict Saurashtra to 115 for nineBrief scores: Punjab 135/7 in 20 overs (Yuraj Singh 54; P Prasanth 3/11).Kerala 139/5 in 19.5 overs (Sanju Samson 72, Harbhajan Singh 2/19).
First Published on
Last updated on January 9, 2016 8:31 PM IST 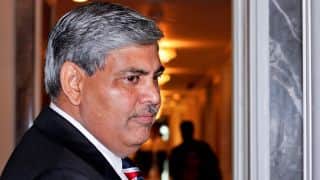 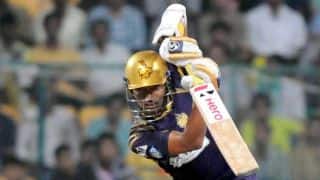