Arunachal Pradesh will face Assam in their next match on March 2.

In the Round 6, Group D encounter at the DRIEMS Ground, Song Tacho-led Arunachal Pradesh outplayed the Taruwar Kohli-led unit and sealed the win with 50 balls to spare and eight wickets in hand. (ALSO READ: Kerala thump Nagaland by 10 wickets)

While Taruwar, who scored 52 off 32 balls, and Akhil Rajput made a solid start after Mizoram elected to bat, the team fumbled despite a 72-run opening stand and was restricted to 122/8 as Sahani (4/35) and Kshitiz Sharma (2/13) did most of the damage, sharing 6 wickets between themselves. Mizoram lost the plot losing 8 wickets for 50 runs despite a solid foundation. (ALSO READ: Uttar Pradesh maintain top spot with 118-run win over Uttarakhand)

Arunachal Pradesh were off to a flying start with the opening pair of Seth and Techi Doria scoring at over 10 runs in an over before Sinan Khadir dismissed Doria in the fifth over. While Khadir added one more wicket to his account as he removed Suheh Hussain, Seth made sure that Arunachal did not any more wickets as the team chased down the total in the 12th over, with Seth top-scoring with an unbeaten 66 off 35 balls and Kshitiz Sharma chipping in with a quickfire 17 not out off 7 balls.

Arunachal Pradesh will face Assam in their next match while Mizoram will take on Chhattisgarh. Both the games will take place on March 2 in Cuttack. 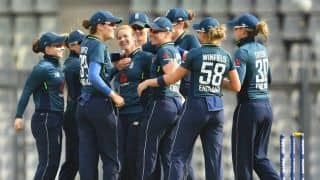