Haryana hammered Himachal Pradesh by seven wickets and advanced to the Super League stage of the Syed Mushtaq Ali Trophy at the PCA Stadium.

Haryana finished second in North Zone and qualified alongside table toppers Delhi. Himachal all-rounder Rishi Dhawan (65 off 44 balls) played a blinder to take his team to 146 for nine from a precarious 39 for five. However, Dhawan’s effort went in vain as Haryana went about their chase smoothly. Guntashveer Singh (48 off 42) and Sachin Rana (39 off 34) starred in the chase.

Haryana raced to 41 in four overs with opener Avi Barot smashing 28 off 14 balls. Singh and Rana got together after Barot’s dismissal and guided the innings. Rana remained unbeaten and got the job done alongside Nitin Saini (13 off 16).

In the other match played in Mohali, Punjab beat Jammu & Kashmir via super over. J&K could only manage to level Punjab’s 144 for eight after getting all out on the final ball of the match, leading to a thrilling finish.

J & K captain Parvez Rasool‘s 52 with the bat and three for 17 as an off-spinner did not prove to be enough. Punjab finished third in North Zone and J & K were fifth.

The Super League stage begins on April 8 in Mumbai and Rajkot. The final will be played in Mumbai on April 14. 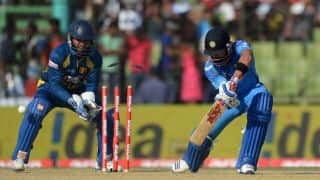