A laptop, diaries, telephones and Rs.40,000 in cash were seized from him during the raid then.

Panaji: A week before the Indian Premier League (IPL) takes off, a bookie previously arrested for accepting bets on T20 matches was found dead in mysterious circumstances, police said on Friday.

The deceased, identified as Lakhpatraj Jain, is a native of Ahmedabad in Gujarat.

On Thursday, Jain was found dead near some bushes in the upscale Altinho area in Panaji, which also houses the chief minister’s residence and other VIP homes.

“We found two offshore casino entry ticket stubs in his pockets,” a police spokesperson said, adding that the deceased was also staying at a hotel owned by a casino group near Panaji. There were no external injuries, police said.

Jain was previously arrested in 2013 along with a group of other bookies from a resort in Goa during the Champions League T20 match between Rajasthan Royals and Perth Scorchers.

A laptop, diaries, telephones and Rs.40,000 in cash were seized from him during the raid then. A postmortem is expected to be conducted later on Friday, even as police have refused to rule out murder for now. 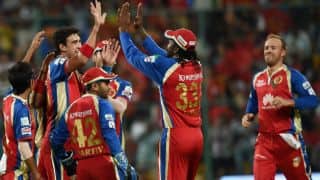