Shubham Ranjane did the star turn with both bat and ball as ARCS Andheri recovered from a poor start to inflict a 23-run defeat on North Mumbai Panthers.

Shubham Ranjane did the star turn with both bat and ball as ARCS Andheri recovered from a poor start to inflict a 23-run defeat on North Mumbai Panthers in the opening game of the inaugural T20 Mumbai League at the Wankhede Stadium here today.

Ranjane first rescued his side, which was tottering at 16 for 4, with a 50-ball 65 that helped Andheri recover to amass a challenging total of 164 for 7.

Later the Mumbai Ranji Trophy player, who had earlier played limited over cricket for Maharashtra before shifting base, took the scalps of rival captain and Test stalwart Ajinkya Rahane and India’s World Cup under-19 winning skipper Prithvi Shaw for 18 runs in 3 overs before limping off the field after being injured while chasing a ball.

But there was enough firepower at the disposal of his team which bowled out North Mumbai for 141 in 19.1 overs to emerge victorious.

Rahane (28) and Shaw (14) put on 38 for the first wicket, but once both were packed off by Ranjane with 49 on board, it was an uphill task for North Mumbai who lost wickets regularly.

Apart from Ranjane, Tushar Deshpande (3 for 25) and Vineet Sinha (2 for 21) struck late to be among the wickets.

Earlier, Andheri recovered from a shock start after they were reduced to 16 for 4 off 14 balls with three batsmen dismissed for duck which included Mumbai Ranji opener Akhil Herwadkar.

Ranjane led the recovery act in the company of left-handed batsman Parag Khanapurkar who started slowly but then opened out in making 61 off 38 balls.

Ranjane, who struck a straight six and six fours, and Khanapurkar, who hit 3 sixes and 2 fours, added 117 runs from 83 balls for the fifth wicket to push the score past the 130 mark when the former slashed a wide ball the first from Rakesh Prabhu in his second spell and was caught at backward point in the 17th over.

Khanapurkar was later caught brilliantly off his own bowling, a tumbling effort after covering 30 yards to his left, by Malhotra in the 18th over before Siddharth Chitnis made a quick 11-ball 17 to take the score past the 160 mark.

Ranji medium pace bowler Shivam Malhotra picked up two wickets for the Mumbai North team in his first two overs and then added another to end up with 3 for 41, his last two overs costing 23 runs.

His pace partner Prabhu, the best bowler on view in the innings, grabbed two wickets in his first over and then came back to snap up another to finish with an impressive haul of 3 for 20 off four overs. 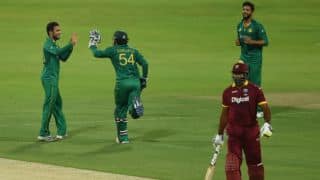 West Indies to tour Pakistan for 3-T20I series in April