The winner of the match will play England in the final on April 3.

West Indies have spoilt India’s party already twice this year. The ICC Under-19 Cricket World Cup 2016’s final was played between India and West Indies. Ishan Kishan and Co were unbeaten throughout the tournament before losing the ultimate match. They were defeated in the final by West Indies by 5 wickets. It was the first-ever Under-19 World Cup trophy for West Indies. The second upset caused by the Caribbean men was during the group stage of ICC Women’s World T20 2016. The Indian Eves were knocked out of the tournament earlier in the month after they lost their must-win tie to West Indies Women. These two nations once again go face to face on Thursday. FULL SCORECARD: India vs West Indies, 2nd Semi-Final match at Mumbai

MS Dhoni’s men take on West Indians in the second semi-final of ICC World T20 2016 at Wankhede Stadium, Mumbai and the winner of the match will play England in the final at the iconic Eden Gardens on April 3. Both the countries have been former champions of World T20 with India winning the inaugural tournament in 2007 and West Indies taking the title in 2012.

While West Indies finished the group stage as table toppers of Group 1, India were second in Group 2. West Indies remained undefeated as they went past the likes of England, Sri Lanka, Afghanistan and South Africa. On the other hand, India lost their opening encounter against New Zealand before making a superb comeback by winning all their next fixtures that were against Pakistan, Australia and Bangladesh.

The match is being played at Wankhede Stadium and that pitch easily favours the batters so the match will revolve around the performances of India’s Virat Kohli and opposite him will be West Indies’ and world’s most explosive batsman, Chris Gayle. 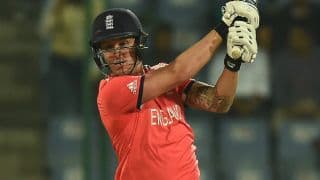