Afghanistan cricket fans consider their cricket team to be fast-growing, as they have qualified for the World T20.

New Delhi: Afghanistan cricket fans consider their cricket team to be fast-growing, as they have qualified for the World T20 and surprised many by their fascinating performance in the tournament. The Afghans living in the national capital are satisfied and say that winning or losing does not matter right now, as they are new in the World Cup. “We are very happy that Afghanistan is playing in the World Cup. We will be satisfied even if they lose, because England and other teams have been playing since a long time, but we are new to this” said Alex, an Afghan Cricket enthusiast. FULL CRICKET SCORECARD: West Indies vs Afghanistan, Super 10 Group 1, Match 30 at Nagpur

“We are very happy. The Afghanistan team is new in cricket and is growing fast. We all are excited. Their performance has been satisfactory. Afghanistan has got a good opportunity after a long time. People are passionate about cricket and are excited to watch the game.” said Sulaiman, another Afghan Cricket enthusiast. The Afghanistan team has surprised many with their performance. Afghans all over the world are celebrating its gradual rise in the sport. T20 World Cup 2016: West Indies aim for another elusive win against Afghanistan

Afghans also appreciate the brotherly bond that Indians share with them. The Afghan team making it to the top 10 in the T20 has got fans excited. “We will be happy even if Afghanistan loses, because the team is improving. In Afghanistan, locals go out and enjoy. Indians also help Afghans because they share a brotherly bond.” said Yusuf, Afghan Cricket enthusiast. Nasrutullah, an Afghan supporter, asserted that they feel very happy when they watch the Afghan team playing with other big teams.

“Our team has qualified in the top 10. I feel very happy when I see the Afghanistan team playing with other big teams,” he said. Although Afghanistan has lost matches with world ranking teams, the Afghan people are still satisfied by the team’s performance in the ongoing T20 World Cup in India. 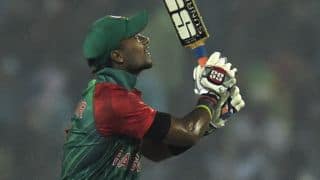