West Indies thundered to their second consecutive victory in ICC T20 World Cup , with Andre Fletcher hitting an unbeaten 84 to guide the team to a 7-wicket victory over Sri Lanka.

West Indies batsman Andre Fletcher cashed in Chris Gayle absence, striking a blistering 84 off 64 balls to get his team to their second victory in the tournament. This time against Sri Lanka in Match No 21 of the ongoing ICC T20 World Cup 2016 at M.Chinnaswamy Stadium, Bengaluru. Fletcher, who came in to open much to the dislike off the crowd, got to his fifty off just 37 balls. Fletcher along with Johnson Charles made 39 runs for the first wicket, with the latter getting out on 10. Vandersay struck first-up picking up Charles, getting him to chop one on to the stumps. Fletcher remained not-out on 84 with Andre Russell on 20 partnering him , to guide West Indies to a 7-wicket victory over Sri Lanka, thus placing they at the top of the table in Group 1 with 4 points from 2 games. Sri Lanka go down at No. 3 below South Africa with 2 points each. LIVE CRICKET SCORECARD: Sri Lanka vs West Indies, T20 World Cup 2016, Match 21 at Bangalore

Marlon Samuels could not do much this time around making just 3 runs to hand Milinda Siriwardana his first wicket. Samuels missed the ball completely only to have the keeper stump him out. Siriwardana was at it again this time picking up Denesh Ramdin for 5 runs from 13 balls as he attempted a mighty slog.

It was all the Andre’s show with Andre Russell joining Flecter, both constructed a 55 run unbeaten stand for the fourth wicket in just 5.3 over. It was not before much drama with Gayle coming down to bat only too be denied by the fourth umpire to step foot on the ground. Sri Lanka had a very poor day in the field again missing out on a couple of chances in the final moments of the match, which could have been inconsequential to the game’s result none the less. Russell finished the West Indies inning with a massive six over cover boundary much to the joy of his team and the crowd alike.

Earlier, Sri Lanka after an horrendous start to their innings managed to get to 122 for 9 in their 20 overs. Samuel Badree spun Chamara Kapugedera, Lahiru Thirimanne and Milinda Siriwardana out of their misery to attain figures of 3 for 12. It was only Lankan skipper Angelo  Mathews and Thisara Perera, who managed to weather the storm having a partnership of 44 runs from 7.2 overs. Perera was out for 40 runs at the end.

West Indies next face South Africa in Match No 27 at Vidarbha Cricket Association Stadium, Jamtha, Nagpur on March 25, while Sri Lanka face England in Match No. 29 at the Feroz Shah Kotla, Delhi on March 26. 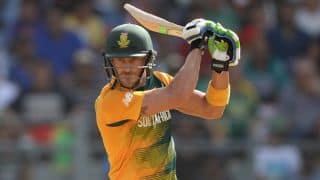 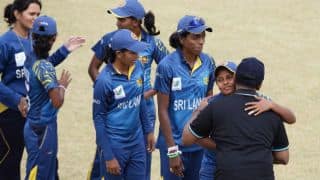