All-rounder Ben Stokes is confident that the England cricket team can prove their detractors wrong by winning the ICC World T20 for the second time.

New Delhi: All-rounder Ben Stokes is confident that the England cricket team can prove their detractors wrong by winning the ICC World T20 for the second time as a lot of things are falling in place at the right time, just like it did in their year of triumph – 2010. Asked what would it mean for England to win the WT20, Stokes said: “Quite a lot! It would be nice to win another trophy. Obviously, we’ve only won the one ICC event. Colly (assistant coach Paul Collingwood) did say at the start of the tournament when we were beaten by the West Indies that getting beaten by them was a good omen because it happened to him. Full Scorecard: New Zealand vs England, 1st Semi-Final match, ICC T20 World Cup 2016

“If we can keep following like that and eventually be the winners, that would be amazing. I think we’re one of the least experience teams out here. We weren’t one of the favourites going in. It would be proving a lot of people wrong,” said Stokes, who bowled a brilliant last over against Sri lanka to ensure a semi-final berth for England. For Stokes T20 primarily is “fun” as one needs to have a “sense of humour” which can be helpful when batsmen go hammer and tongs at the bowlers.

“Twenty20 is generally the fun side of cricket. You’ve also got to have a sense of humour. Some days you can turn up and get whacked. Next game turn up, bowl the same and not go for many runs. Got to take it as it comes. It’s been enjoyable, and obviously it’s a massive help when you are winning and you get through to the semi-final.” T20 World Cup 2016: Eoin Morgan satisfied with England’s performance under pressure

Stokes is a New Zealander by birth, being born in Christchurch and migrated to England later. His sense of humour was evident when a scribe asked if he would have had a different career had he played for New Zealand, he gave a reply with his tongue firmly in his cheek. “Probably have a different accent! It might have been when I was 9 or 10 and still living there. Ever since, I made a choice of trying to have a career of being a professional cricketer, ever since getting picked at England under-15s, all I ever wanted to do was play for England.”

His bowling at the death against Sri Lanka has been lauded by one and all. Against a rampaging Angelo Mathews, Stokes bowled four dot balls and according to him, he revels in situation where he needs to be the ‘King of Death’. “I would much rather be doing that last over thing than sitting there watching and hoping whoever bowl it gets us through. I would rather be the man doing it. It’s a lot easier on the nerves. Sounds silly to say when you are the person doing it, but I am not very good watching in tight situations like that.

“I just love being involved in the game and the high-pressure situations and it probably brings the best out of me in terms of my cricket. So hopefully, we don’t get it down to that tight again especially after the start we got. But I enjoy getting put into the big moments in games,” said Stokes. DDCA asked to produce receipts of payment made to SDMC: Supreme Court 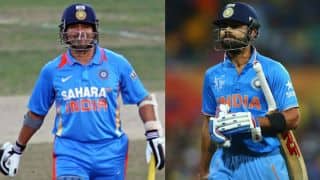