Ben Stokes said he would rather bowl the last over rather than hoping that whoever is bowling it gets England through.

Ice-cool allrounder Ben Stokes said Monday he was revelling in his role as England‘s death bowler after his nerves of steel once again kept his side in the World Twenty20. With Sri Lanka needing 15 runs to win and their captain Angelo Mathews hitting England’s bowlers around the park in Saturday’s crunch match in New Delhi, Stokes was handed the ball at the start of the 20th over. But after spinners Moeen Ali and Adil Rashid were clattered for 21 in their final overs, Stokes bowled a string of near perfect yorkers and conceded only four runs to secure England’s place in the semi-finals. Full Scorecard: New Zealand vs England, 1st Semi-Final match, ICC T20 World Cup 2016

While other England bowlers have come unstuck on the global stage — including Stuart Broad who was hit for six sixes by India’s Yuvraj Singh in the 2007 World T20 — the 24-year-old Stokes is relishing the responsibility. “I would much rather be doing that last over thing rather than hoping that whoever is bowling it gets us through. I’d rather be the man doing it,” he said in the build-up to Wednesday’s semi-final against New Zealand. “Yes, I love being involved in the game and being in high pressure situations. I think it probably brings the best out of me in terms of my cricket. I enjoy getting into the big moments of the game.” FULL MATCH SCORECARD: England vs Sri Lanka , 29th T20 Match, Super 10 Group 1, ICC T20 World Cup 2016

England’s passage to the semis was hampered by defeat to the West Indies in their opening match, meaning they had to win all of their other three games against Sri Lanka, Afghanistan and South Africa. The West Indies also beat England in 2010 but Paul Collingwood’s side went on to win the tournament in the Caribbean, the first time that the team had ever won a major international tournament. Collingwood, who has captained Stokes back home in Durham, is currently in India as a consultant for the England team. T20 World Cup 2016, India vs New Zealand at Nagpur: Never seen such poor wicket, says Ben Stokes

“Colly actually did say that at the start of the tournament that we got beaten by the West Indies in the first game. It’s a good omen because that’s what happened to him,” Stokes told reporters in New Delhi. Under the captaincy of Eoin Morgan, a young England side is developing a reputation for aggressive strokeplay which has surprised many observers. Stokes is one of the more seasoned members of the team after making his international debut in 2011. T20 World Cup 2016: Eoin Morgan satisfied with England’s performance under pressure

He said that as “one of the least experienced teams out here”, England have an opportunity to “prove a lot of people wrong”. Stokes, who was actually born in Christchurch on New Zealand’s South Island, said that England would not underestimate the unheralded Black Caps, but pointed out that they did beat them in a World T20 warm-up match. “They’re obviously the in-form team, they haven’t lost a game yet. We played them in a warm-up game and beat them and we still take confidence from that and we obviously beat them in the English summer when we had the series against them,” said Stokes.

“So we just know that if we play to our capability like we did against Sri Lanka, no matter who we face, we can give any team a good run.” While it will be the fifth different venue for New Zealand in the tournament, England should have an advantage by playing their third match in a row in Delhi, with Stokes saying that “it’s a home game even if we are in India”. 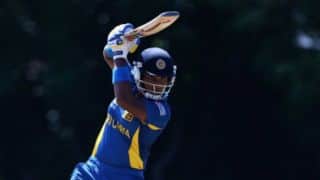