The “Champion” song is here to stay as it becomes the part of West Indies celebration once again after winning the T20 World Cup 2016 Champion title. They did something similar to the post semi-final match celebration after beating hosts India in the last over at Wankhede, Mumbai. Dwayne Bravo and skipper Darren Sammy entered the Airport dancing to the tunes of “Champion”, leading the team to the after-party. West Indies players were over-flowed with emotions after winning the World Cup. Marlon Samuels takes a dig at Australian legend Shane Warne after he was adjudged as Man of the Match for his unbeaten 85. The feud between the two started back in Big Bash League and recently fuelled up as he commented on Samuels failing to score runs in the semi-final against India. FULL CRICKET SCORECARD: England vs West Indies, ICC World T20 2016, Final at Kolkata

Darren Sammy was also full of emotions in his after-match speech where he bashed WICB (West Indies Cricket Board) for not supporting them throughout the tournament. He revealed that they didn’t even have jerseys to play the match when they came here and got them printed in Kolkata. He said that they didn’t even get an ounce of support from their Cricket Board, not even a single mail of appreciation from them or motivating them to good in the finals. T20 World Cup 2016 Final: WICB Chairman Dave Cameron thinks it is the beginning of West Indies’ revival

We were there to capture the moment you’ve all been waiting for… THE #WT20 CHAMPS ARE HERE!https://t.co/fNhU7Ws2A1

He added to his story that they are supported more by BCCI than their own Cricket Board. He also mentioned that West Indies are not a one-man team and all the 15 players are match-winners. He also expressed concerns over not having a single T20 scheduled in this year. 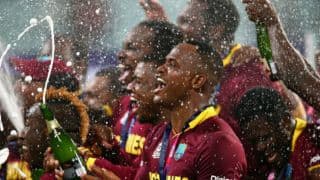