The much awaited India-West Indies World Twenty20 semi-final clash at the Wankhede Stadium on Thursday will be umpired by Richard Kettleborough, Ian Gould.

In the first semi-final double-header in Delhi on Wednesday, three-time women’s champion Australia will take on 2009 winners England. This match will be umpired by Chris Gaffaney and S Ravi, while Joel Wilson will be the third umpire and Ranmore Martinesz the fourth umpire. Jeff Crowe will be the match referee. This match will be followed by the men’s semi-final between England and New Zealand. Kumar Dharmasena and Rod Tucker will be the on-field umpires with Bruce Oxenford and Joel Wilson as third and fourth umpires, respectively. David Boon will be the match referee.

In Mumbai on Thursday, New Zealand will square off against the West Indies in the second women’s semi-final. This match will be umpired by Richard Illingworth and Nigel Llong, with Paul Reiffel as third umpire and Simon Fry as fourth official. Javagal Srinath will be the match referee. Appointments for the April 3 final at Eden Gardens in Kolkata will be announced on April 1. 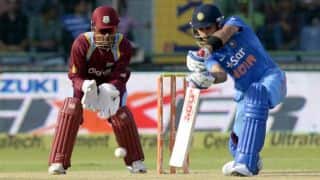