Ben Stokes said he never saw such a poor quality deck since he was a schoolboy growing up in his native New Zealand.

England all-rounder Ben Stokes recently joked that that India‘s defeat against New Zealand in ICC T20 World Cup 2016  was because of the poor quality of the wicket that they prepared. He added that he has never seen such a poor quality deck since he was a schoolboy growing up in his native New Zealand. “The astro-turf pitch with cigarette burns on a length at my old school was a better than that wicket,” he tweeted. Meanwhile, West Indies legend Brian Lara has said that India’s defeat meant that the hosts are unlikely to prepare such a “disappointing” wicket again, adding: “This could be the early lesson India needed to go all the way.” FULL CRICKET SCORECARD: India vs New Zealand, T20 World Cup 2016, Match 13 at Nagpur

New Zealand media on Wednesday hailed as a “masterstroke” the bold selection behind the Black Caps’ stunning win over India in the World Twenty20 opener.”What a twist”, trumpeted Fairfax NZ’s stuff.co.nz website after New Zealand’s unheralded spinners tweaked the Black Caps to a 47-run victory over the hosts in Nagpur. “Selection masterstroke turns the cricket world on its head, as NZ spinners slay India,” it added, referring to coach Mike Hesson’s decision to opt for a three-pronged spin attack and omit seamers Trent Boult and Tim Southee. READ: Life comes a circle for India at ‘diabolical’ Nagpur against New Zealand in T20 World Cup 2016

The gambit paid off spectacularly as the slow bowlers took nine wickets on a dustbowl, including four for 11 from man-of-the match Mitchell Santner. “India, the world number one ranked T20 side and tournament favourites, were undone at their own game in their own conditions,” the site said, pointing out New Zealand had now won their past five T20 matches against India. The New Zealand Herald declared it the best possible start to the tournament for the Black Caps, who face Australia on Friday. T20 World Cup 2016: Why India lost against New Zealand at Nagpur

Former Australia captain Ian Chappell said the tactic was reminiscent of the recently deceased New Zealand great Martin Crowe‘s decision to open with spin at the 1992 World Cup, when the Black Caps made the semi-finals.  “Martin Crowe was way ahead of himself back in 1992 when he introduced it with Dipak Patel,” Chappell told Cricinfo. “[He] had a lot of success… after what we have seen tonight there will be more teams adapting that tactic.”

Former New Zealand paceman Simon Doull said India came unstuck by using home advantage to prepare a spin-friendly wicket, rather than trusting in the quality of their batsmen. “It doesn’t happen very often like that, that India get spun out,” he told Radio Sport. “I think India have a terrific side, they just need to play on good surfaces because their batting is so good. They don’t need to make pitches like this.”

Video: The much-awaited teaser trailer of ‘MS Dhoni – The Untold Story’ is out 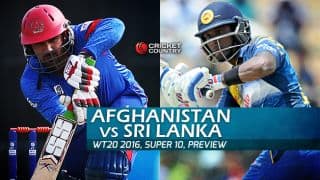