Top Pakistan Cricket Board (PCB) officials Shaharyar Khan and Najam Sethi will be in attendance to watch India take on Pakistan in ICC World T20 2016 to be played in Kolkata on March 19.

India won by 6 wkts
Man of the Match: Virat Kohli
New Delhi: Top Pakistan Cricket Board (PCB) officials Shaharyar Khan and Najam Sethi will be in attendance to watch their team take on India in the marquee match of the ICC World T20 to be played in Kolkata on March 19. Cricketer-turned politician Imran Khan is also among the Pakistani guests expected to watch the much-awaited clash at the Eden Gardens. “Our chairman (Shaharyar) is travelling to Kolkata for the match and so is Najam Sethi (executive committee chairman),” PCB media director Amjad Hussain said today. Former Pakistan captain Imran is also expected to be in attendance alongside Zaheer Abbas, who is the current ICC president. FULL CRICKET SCORECARD: India vs Pakistan, T20 World Cup 2016, Match 19 at Eden Gardens, Kolkata

For the record, Pakistan have never lost to India at the Eden Gardens while the hosts have never lost to Pakistan in the World Cup. Pakistan today kicked off their campaign with a 55-run win over Bangladesh but hosts India suffered a shocking defeat to New Zealand last night. The two Asian arch rivals India and Pakistan will clash once again in the early part of 2016, at the picturesque stadium in Dharamsala on March 19. It will be a double header for India and Pakistan, as earlier in the day, the women’s team from both the countries will be clashing in the afternoon and the men’s match will be played in the evening. READ: T20 World Cup 2016: Pakistan upset over five diplomats denied visas to travel Kolkata 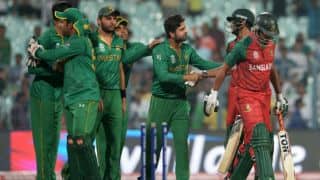