Jason Roy has branded his innings against New Zealand as `one of his greatest achievements` and also hailed England's approach in WT20.

New Delhi: After inspiring his side to the finals of the World T20, England batsman Jason Roy has branded his innings against New Zealand as `one of his greatest achievements` and also hailed his team’s approach during the tournament. “It’s the most mind-blowing experience of my life to date, that performance is up there with one of my greatest achievements, so I’m just super happy for the lads to get that experience on Sunday,” the 25-year-old said following their six-wicket win over Kane Williamson’s side at Feroz Shah Kotla Stadium on Wednesday. Roy played a major role in what turned out to be a perfect chase for the 2010 champions. He smacked 78 off mere 44 balls, including 11 boundaries and two sixes and shared a brisk 82-run partnership with Alex Hales (20) as England chased down a respectable 154-run target with 17 balls to spare. FULL CRICKET SCORECARD: England vs TBA, T20 World Cup 2016, Final at Eden Gardens, Kolkata

Describing the win as `special`, the Surrey batsman said that his players were not realizing what they had achieved, adding that it was his side’s approach and confidence that had helped them in bouncing back after their opening-match defeat to West Indies. “The whole team have got that kind of licence and that opportunity to go out there, do what they want and play freely with our skills,” Roy was quoted as saying by ecb.co.uk. T20 World Cup 2016 final: Jason Roy looking forward to play at Eden Gardens

Reflecting on his strategy, the opener said that he had decided to give his side with a good start in order to make it easy for the middle-orders to chase down the target. “I just looked at the runs that we needed and knocked them off. Obviously if you let the occasion get to you then it can be to your detriment so I just went out there and gave it a crack,” said Roy. England are now short of one victory to clinch their second World T20 title as they will play either India or West Indies in Sunday’s final at Eden Gardens in Kolkata. 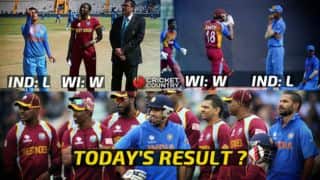 Manish Pandey: Was motivated to train harder after put on stand by for T20 World Cup 2016