England captain Eoin Morgan said the 57-run eight-wicket stand between Moeen Ali and David Willey proved to be the difference in his side's win against Afghanistan in ICC World Twenty20 match at the Feroze Shah Kotla,

New Delhi: England captain Eoin Morgan today said the 57-run eight-wicket stand between Moeen Ali and David Willey proved to be the difference in his side’s win against an ever-improving Afghanistan in a group match of the ICC World Twenty20 at the Feroze Shah Kotla. A nervy England survived a top-order collapse before dishing out a much improved bowling and fielding display to beat minnows Afghanistan by 15 runs in a Super 10 Group 1 clash. But it was far from convincing from England as they survived a mighty scare before riding on Moeen Ali (41 off 33) and David Willey’s (20 off 17) late burst to post a competitive 142 for seven.  FULL CRICKET SCORECARD: England vs Afghanistan, T20 World Cup 2016, Match No.24 at Delhi

“It (the partnership between Moeen and Willey) was very important. The difference of chasing 120 and 140 is huge. One of our strengths is that we bat down the order. He (Moeen) batted really well today. We knew Afghanistan were playing four spinners and only one seamer and they would run the risk of bowling spinners in the last few overs,” Morgan told reporters at the post-match press conference.

“It was hugely important. The way rest of our batting struggled today, both those guys showed a great deal of application in the right manner. Starting on difficult wickets like this is very important.”

The English skipper said after today’s outing they got vital knowledge about the Kotla pitch ahead of a crucial game against Sri Lanka on Saturday. “I think we have learnt a lot about the wicket. Every single one of us was expecting this type of wicket. We spoke a lot about it before the game. I think the execution of our plans today were off by a long way. So it’s very important that between now and Sri Lanka game we sit down as a group, emphasise what we want to do and make the right plans and execute them,” Morgan said.

England at one point of time were looking down the barrel at 57 for 6 in 9.2 overs. Asked what was going on his mind at that time, Morgan said: “To get a score on the board. I thought if we could push 120-125 and bowl brilliantly I thought we had a chance. But the 18th and 19th over of left-arm spin helped a long way.”

He refused to admit that batting is a concern for England especially after today’s performance.

“No absolutely not. We chased down 230 a game ago. I think it was simply a matter of not adapting,” was Morgan’s reply when asked about the question.Morgan said they were not at surprised by Afghanistan’s fighting performance. “Before the start of the game we knew Afghanistan is a good side but I think if they were to beat us we need to under perform. We let them in today by under performing with the bat. But our bowling was outstanding. In the field as well we were pretty good,” he said.

“They (Afghanistan) didn’t really surprise with anything that they didn’t do before. They are probably the best associate nation at the moment and that’s a huge honour. If they continue to play in that fashion they will improve their cricket.” Afghanistan all-rounder Rashid Khan, who picked up 2 for 17 and later contributed 15 runs with the bat, said they missed a golden chance to cause an upset.

Rashid said Ali’s knock under pressure made all the difference. 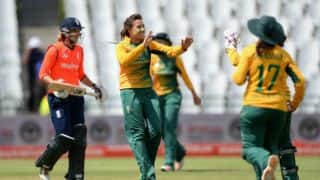