Mitchell Santner, whose international cricket can still be called nascent, returned four for 11 to help shoot out India for their second-lowest ever score of 79 in Match 13 of T20 World Cup 2016

Nagpur: Hero of New Zealand’s thumping win over India, Mitchell Santner said they vindicated the selectors’ decision to play three spinners in their World T20 opener, here. Santner, whose international cricket can still be called nascent, returned four for 11 to help shoot out India for their second-lowest ever score of 79. “It was selectors decision to bowl three spinners. When spinners take nine wickets on a spin track then it’s not a bad one,” the 24-year-old left-arm spinner said at the post match press conference. Santner was given splendid support by Ish Sodhi (3 for 18) and experienced off-spinner Nathan McCullum (2 for 15). FULL CRICKET SCORECARD: India vs New Zealand, T20 World Cup 2016, Match 13 at Nagpur

“Looking at the pitch we knew it will spin. There was lot of purchase out there. I think we are lucky that three of our spinners were able to do the job. We also thought of going for an aggressive start (while batting). But it started spinning a lot later on. if we could have got a good start it would have been good, but we got 120 (126),” he explained. Santner said the stunning win will help them a lot in the tournament. “Every time you beat India, it s a confidence booster. We will take a lot of positive out of this match. We knew it will be a hard fought game, we had to fight to defend our total Indian bowlers bowled well. We came out and stuck to our plans,” he said further. READ: T20 World Cup 2016: Why India lost against New Zealand at Nagpur

One of his victims was India s top batsman Virat Kohli. “Kohli is a world class batsman, but any Indian wicket is a good one,” he said. Looking ahead he said the pitch at Dharmasala, where they take on Australia next on March 18, could be different. “Everywhere we go pitches will be different. We have to wait and see how the pitch is but for me I will like a similar pitch like today,” Santner said. 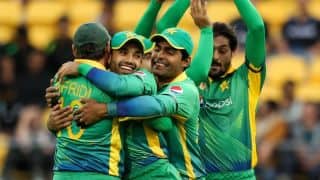