India has denied seven Pakistani diplomats permission to visit Kolkata for the high-voltage World T20 encounter between India and Pakistan.

New Delhi: India has denied seven Pakistani diplomats permission to visit Kolkata for the high-voltage World T20 encounter between India and Pakistan on March 19, an official at the Pakistan High Commission said on Tuesday. Terming the development as unfortunate, the official, who wished not to be named, said the diplomats intended to boost the morale of their cricket team.  “It is unfortunate that India, despite being the host of the World Cup, is refusing to fulfil its obligations and creating hurdles,” he said. The official told IANS that appropriate steps will be taken and “Indian deputy high commissioner in Islamabad will also be summoned”. FULL CRICKET SCORECARD: India vs Pakistan, ICC World T20I match at Kolkata

Earlier, standing by his beleaguered skipper Shahid Afridi, Pakistan head coach Waqar Younis on Tuesday said he did not find anything controversial in his comments that the country’s cricketers got more love in India than back home, but hoped that the resultant storm would not affect the side’s morale in the World Twenty20. Waqar, a former captain, said Afridi only expressed his feelings and emotions. T20 World Cup 2016: Shahid Afridi backed by Waqar Younis over his comment on Indian fans

“Look, for me I didn’t find anything that controversial in it. It is something he felt, showed emotions,” Younis said at the customary media meet here on the eve of Pakistan’s maiden Group 2 clash in the tournament opposite Bangladesh. Waqar felt the matter should be allowed to rest now. “We should leave that rather than creating controversy about nothing. We are here to play cricket, we are here to beat teams and I think we should just focus on cricket,” Waqar, regarded as one of the greatest pacers, said. 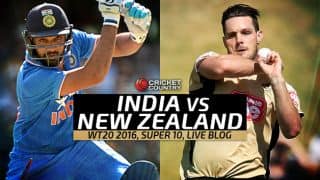