Mohali: Pakistan may be down and out but Australia’s wicketkeeper Peter Nevill today said they are a “dangerous team” and his side cannot afford to be complacent against them in their World T20 game here on Friday. “There is certainly no complacency from our point of view. We certainly won’t be underestimating them. They are a dangerous team. If we don’t perform well, we lose,” Nevill said at a press conference here. Nevill said Pakistan did not lack batting firepower. FULL CRICKET SCORECARD: Pakistan vs Australia, Match 26, Super 10 stage, ICC World T20 2016 at Mohali

“I certainly don’t think they lack batting firepower. You just got to look at their couple of players, who on their day, can be incredibly destructive,” said the 30-year-old, who was a surprise inclusion in the Aussie squad for World T20 event.

Nevill said his team would look to win both its remaining ties (against Pakistan followed by India) in the league stage. “If we drop (lose) one of these next two games, then you are obviously relying on other results hoping they go your way. You would rather not be in that position. It is a must-win game (against Pakistan) for us,” he said.

Asked which team will be tougher to beat — India or Pakistan — the wicketkeeper-batsman said: “I don’t know, I have not thought about that. They are both tough. It is very different challenge playing Pakistan and India. You have obviously to compete against different players with different strengths. I don’t think it really helps to compare the two.”

“We would have surely liked to be more clinical in the run chase. We haven’t been, I suppose, as clinical as a batting unit as we want to be, but this game against Pakistan is a perfect opportunity. There are lot of guys in the change room who really will be looking to turn it on, putting a good performance and make some big runs,” he said.

Nevill heaped praise on young Aussie leg spinner Adam Zampa, who took three wickets against Bangladesh. “He bowled beautifully. His performance was fantastic and turned the match in our favour. It was a crucial spell in the scheme of things. He has been performing beautifully and bowling well,” he said.

On the Mohali wicket, Nevill said, “I am not entirely sure which pitch we are on. Judging from game last night here, I thought personally, it played pretty similar to the one we played against Bangladesh in Bangalore. We will have to see if it changes in a day or so. We will have to adjust to what we are given (if it is a turning track).”

Nevill, who made his Test debut last year and featured in only five T20 Internationals, said it is a “fantastic” experience playing in India. On what kind of personal goals he has set for himself, Nevill said: “I didn’t set any personal goals, really. Just a matter of doing the role I am asked to do and doing that successfully.”

About challenges of wicketkeeping in sub-continent conditions, he said, the fundamentals remain the same, “but it is lot more exciting with lot of spin here, it is enjoyable as wicket-keeper”. 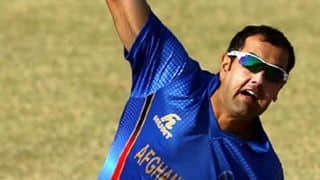