New Zealand, in their first match of the T20 World Cup 2016, outwitted India and pulled off a superb win in conditions that suited spin bowlers the most. Ross Taylor, the right-hand batsman for the Kiwis was ready to give the credit of the win against the hosts to his captain Kane Williamson and coach Mike Hesson for all the strategical changes that were made in the side. “It was a big call but we knew what the wicket was going to play like, with the games beforehand and just looking at the wicket we knew it was going to take some turn. It did probably turn a little more than we were expecting.” LIVE CRICKET SCORECARD: India vs New Zealand , Live Score, 13th T20 Match, Super 10 Group 2, ICC T20 World Cup 2016

“And you know a lot of credit has to go to Williamson and Mike Hesson first of all for coming up with the plan, then for the forthright to go with it. You have got two very experienced players, who have had a lot of success in these conditions, it takes a lot of guts to do that,” Taylor said in a press conference at the HPCA Stadium on Thursday. Taylor in spite of the team’s successful changes in the squad feels conditions might not be the same in Dharamsala as they were in Nagpur and therefore they will have to analyse first before heading into the game against Australia. “Obviously we have to wait and see what the conditions are like,” he said.

“The boundaries are lot smaller here. In Nagpur the boundaries were so big, so you couldn’t attack the spinners as much as you would have liked because if you didn’t hit the ball 100%, you were going to get caught at the boundary. Rotating the strike played a big part there but here mishits can still go for six. We just have to wait and see”, Taylor said, as reported on cricbuzz.com. He felt, rain will definitely play a part in the game and therefore, his team will have to keep them in mind. “Every game is totally different and we need to access the conditions here and of course with rain around it could be a shortened game and we need to change the balance. May be we will not go in with three spinners and obviously different power options as well.” READ: Australia vs New Zealand, T20 World Cup 2016, Match 17 at Dharamsala: Kane Williamson vs Josh Hazlewood and other key battles

Taylor thought that the victory against India was a satisfying one, especially because of the spinners in the side, but didn’t want his side to get complacent after beating the hosts. “It was definitely a lot of happy team-mates after the game,” he pointed out. “But we don’t want to get too carried away. Its just one game in what is a short and condensed tournament. Lot of games to be played. The big positives were the way our spinners played. It was the first time we have got in with that balance. (Mitchell) Santner and Ish (Sodhi) bowled outstandingly well. We are accustomed to Nathan and his T20 record is outstanding but those guys are very inexperienced, to come out and play in front of such a big crowd in such a big game, they will take a lot of confidence”, Taylor said.

The fact that New Zealand are now lined to face Australia up next is a challenge that Ross Taylor thoroughly enjoys. He hasn’t forgotten the World Cup Final loss to Australia but believes the team has moved on since then. “Anytime you play Australia they are a big brother I guess. They always had a lot of success against us in few games,” he said. “These are very foreign conditions to what we’ve played in Eden Park or MCG and you know it takes spin. Both teams in the past have their moments against spin. I think spin will have a big role to play tomorrow and what ever happened 12 months ago is gone and it is a new team that is looking forward to play in bigger matches. READ: Australia vs New Zealand, T20 World Cup, Match 17 at Dharamsala: Australia s likely XI

The rivalry still matters what ever sport it is. Be it cricket, rugby, hockey its always special for a New Zealander to win over there,” he said and pointed out that his side will be taking some confidence out of their victory in the Chappell-Hadlee trophy recently”, said Taylor when asked about New Zealand’s rivalry with the Australians.

Kane Williamson, became the captain of the side after Brendon McCullum’s retirement recently, and Taylor praised Williamson for taking up the role very well. Taylor was also impressed by the 25-year old’s approach, feeling positive about his growth as a leader in the times to come.. “Kane has been outstanding. Brendon (McCullum) retiring before Christmas, gave Kane got a lot to time to learn off Brendon first of all and come up with a style that is nice to him. It is never easy to to captain after Brendon’s style and charisma. The way he batted but also they way he talked and used those big words. Kane is genuine in the way he comes about and talks and very softly and maybe in three years you will see his real character”, said Taylor. 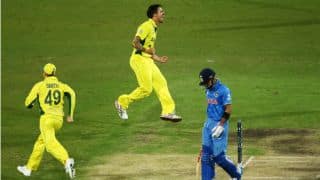