Anurag Thakur said referring to the controversy triggered by Shahid Afridi's previous remark on getting "more love in India than back home".

New Delhi: BCCI Secretary Anurag Thakur on Wedensday criticised embattled Pakistan captain Shahid Afridi for saying that “a lot of people from Kashmir” had come to support his team during the World Twenty20 match against New Zealand in Mohali. “To give a statement like that is not politically correct. A player should stay away from all this. That’s the reason why he was criticised in Pakistan,” Thakur said referring to the controversy triggered by his previous remark on getting “more love in India than back home”. During last night’s match, which Pakistan lost, a section of the crowd cheered Afridi at the toss, prompting former Pakistan captain Rameez Raja to ask if he and his team had support from the spectators. Shahid Afridi surpasses Lasith Malinga to become leading wicket-taker in World T20s

“Yes, a lot of people, a lot of people are here from Kashmir as well. And I want to thank people of Kolkata, they really support us as well,” Afridi said at the Punjab Cricket Association stadium just before the start of the game. “It seems you have a bit of fan following here in Mohali,” Raja had remarked after Afridi lost the toss. Afridi is set to be axed as captain after the World T20 owing to Pakistan’s loss to India in a crunch World T20 match. Shahid Afridi: T20 World Cup 2016 game against Australia could be my last

The flamboyant all-rounder had triggered outrage in Pakistan after stating that his team gets more love in India than back home. Last night, Afridi gave clear indications that he would retire from the shortest format after his team’s campaign ends in the ongoing ICC World Twenty20. After suffering a 22-run defeat to New Zealand, Afridi said the upcoming game against Australia could be his last.

“That [the match against Australia] could be my last,” Afridi said at the post-match presentation ceremony. Disappointment was writ large on Afridi’s face even as he congratulated New Zealand. Senior BCCI functionary and IPL Chairman Rajeev Shukla said Afridi perhaps does not understand the psyche of an average cricket fan in India.

“I don’t think there is any need to react to Shahid Afridi’s statement. You can understand the kind of phase he is passing through. If he says something, I don’t think we should give much importance to it. The only thing I would say is that he doesn’t know the Indian spectators. Whoever plays well, they always applaud and appreciate that player,” Shukla said. “There is no need to distinguish between them as Kashmiris or anybody else. They all are Indians. It was a neutral game as far as Indian spectators were concerned. So please don’t try to play politics. All Indians are cricket lovers,” he added.

BCCI criticises Shahid Afridi for his comment over Kashmir 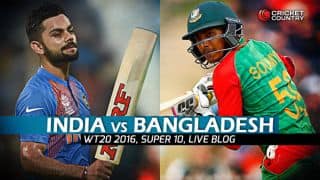