Shahid Afridi is said to retire from international cricket after the ICC World T20 2016.

Mohali: Everyone may be gunning for him after losing to India, but beleaguered Pakistani captain Shahid Afridi‘s brother Mushtaq  on Tuesday backed him to the hilt, saying his elder sibling is a “big fighter” who knows how to tackle “tough situations”. Afridi’s family and friends including younger brother Mushtaq turned up to watch the Pakistan-New Zealand ICC World Twenty20 match at PCA stadium here this evening. When asked if there was any pressure on Pakistan in Tuesday’s game after losing to India at Kolkata, Mushtaq told PTI , “No, I don’t think so”. At the same time, he, however, added, “but you know that in big events there is pressure as such and one enjoys these conditions. If they [Pakistan] focus, god willing, better results will come.” FULL CRICKET SCORECARD: New Zealand vs Pakistan, ICC World T20 2016, Super 10 Group 2, Macth 23 at Mohali

With angry reactions back home and some tough talking even from the PCB, Mushtaq when asked how does his elder brother face challenges in life, said, ” he is a big fighter, as far as I know him.” Adding further, he said, “He knows how to tackle tough situations and handle them. He tries to motivate others”.

On Pakistan’s World Cup campaign, he said, “we will get good results.” “We hope the World Cup will be great for our team and it progresses for the next round,” he said. READ: Pakistan will have a new captain after T20 World Cup 2016, says PCB Chairman 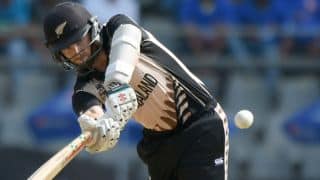