JP Duminy says poor bowling and giving too many extras cost them the match.

Mumbai: All their efforts to stop a rampaging England ending in smoke, South Africa’s all-rounder JP Duminy said it was the bowlers who let them down by giving too many extras during their two-wicket loss in ICC World Twty20 match here. Despite posting a record 229, South Africa failed to stop England from overhauling the target last night and Duminy said there is plenty of room for improvement in their bowling. “Definitely we would have backed ourselves defending 229, but you got to credit (the opposition). We did not ball as we would have liked,” Duminy told reporters at the post-match media conference late last night. “But they batted outstandingly, especially the first six overs, they (England) put us on the back-foot, from ball one, we sought of little bit recovered in the middle but on a field like this and a wicket that we played on, when you are getting the asking rate under 10, it is tough to defend,” he said. Full Cricket Scorecard: South Africa vs England, ICC World T20 2016, Match 18 at Mumbai

South Africa conceded 26 runs in extras which comprised 20 runs as wide and 6 leg byes. For England, Joe Root top scored with 83 off just 44 balls at the Wankhede stadium here. “Unfortunately we let ourselves down also from the extra’s point of view, too many wides and so forth so, that’s something we need to look that,” Duminy said. “But a lot of positives to take out of it (the game) especially the batting point of view, there is room for improvement from bowling point of view, but we got to move to the next game. It’s a quick turnaround, Afghanistan coming on Sunday (tomorrow) and we have to make sure that we prepare well for that game,” the left-handed batsman said. ALSO READ: Joe Root firmly asserts his place in modern batting mastery after England’s victory over South Africa in T20 World Cup 2016

When quizzed about fast bowler Dale Steyn giving away 23 runs in the 2nd over of the England innings, Duminy said, “As I mentioned earlier definitely it put us on the back-foot, but it’s not only that he (Steyn) went for 23, if you look at entire power-play period, we were under the pump. “Everybody that came on (to bowl) went for few (runs), and yes the upside to the power-play, we got 3 wickets, which sort of evened it a little bit, but unfortunately as I said the extras probably let us down too much, that’s something we going to have to look at,” he opined. The 31-year-old player, who remained unbeaten on 54 and snapped a wicket, said the team was under the pump but they were no way out of the tournament.

“I obviously take a lot of confidence out of today’s game with bat and ball, but it is just the start, it is long way to go in this tournament. We obviously as a team are now under the pump and we have to pretty much win every game,” Duminy said. “We will need to take lessons out of it  and we need to take responsibility for that as a bowling group. It’s not only the seamers, as a spinner you need to make sure and try and see where we can improve, but it is always nice to be scoring that amount of runs but we got to find ways to defend it.”Look by no means we are out of the tournament, we understand that (there) is lot more pressure on us now, to make sure we win pretty much every game,” the off-break bowler added.Duminy also heaped praise on Joe Root and described him as the man in form for all the three formats. “He (Root) had a formidable summer, he (Root) is definitely being the man in form for all formats, he always had a calm head, assessing the situation pretty well, he is being the anchor in their team no matter what format, today he paced his innings pretty well.” 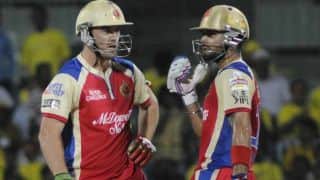