T20 World Cup: How Australia And England Can Qualify For Semifinals?

T20 World Cup: How Australia And England Can Qualify For Semifinals?

England and Australia's washout in Melbourne has left both teams on three points and with all six teams in Group 1 are still able to qualify.

New Delhi: Everybody now knows that net run rate is almost certain to be a huge factor in Group 1 of the ICC Men’s T20 World Cup 2022, but with two must-win rounds of games left it’s too early to focus on only that. England and Australia’s washout in Melbourne has left both teams on three points and with all six teams in Group 1 are still able to qualify.

Results are still the most important thing, with both teams knowing they will need to win each of their remaining two games to qualify in all likelihood. And yet one eye will have to be kept on the issue of the net run rate.

Of the teams who have played three games in Group 1, it is England who have the superior NRR. But margins are small.

The loss to Ireland and a tentative chase against Afghanistan has left England with a lower run rate than they would have hoped for at this stage.

Two no-result games have left Afghanistan behind on points but still in with an outside chance of qualifying if results go their way. A big win is needed though.

With fixtures against Australia and New Zealand to come, Ireland face a tricky task to reach the semi-finals. And they’ll probably need a decent margin of victory in one of those games to overturn the damage of the nine-wicket loss to Sri Lanka

The hammering by New Zealand dented Australia’s NRR right from the off, but Marcus Stoinis’ flurry against Sri Lanka improved it a little.

This is a position neither side wanted to be in, with England arriving at this point thanks partly to two games being impacted by rain.

“Unfortunately we’ve had two games affected by weather,” England captain Jos Buttler said after the points were shared against Australia following the shock loss to Ireland on DLS Method.

“You don’t want to be involved in those games, but it’s going to happen wherever you play, you’re generally going to be affected by some weather at some point.”

It was put to Buttler in his post-match media conference that the team’s next match against New Zealand is now effectively a World Cup Final for the English.

“We’d do well to live up to that one, wouldn’t it?” Buttler joked, referring back to England’s 2019 triumph over New Zealand at Lord’s. For us, we knew, having lost the game against Ireland, the way the format is anyway, every game is pretty much a must-win.”

If England beat New Zealand in that “must-win” game, they will have the advantage of playing last in the final round of matches, meaning they will know exactly what they need in terms of net run rate to qualify.

“It could be a small advantage, but to make use of that, of course, we need to win the game against New Zealand,” Buttler said, keen not to look too far ahead.

“We’ll travel up to Brisbane, everyone’s rested and ready to go. There’s a lot of frustration as well from the last game. People want to right that performance. So we’ll train well and look forward to a tough challenge against New Zealand.”

Australia’s task is simple: win twice and win big. Two large margins of victory against the two lowest-ranked teams in the group, Ireland and Afghanistan, could be enough in themselves to send Australia through.

But that fact won’t impact player selection, according to coach Andrew McDonald.

“Net run rate is going to come into it. We knew that at the start of the tournament. When you only play five games, net run rate can decide and influence who goes through into the final four. We feel as though we’ve been here before,” McDonald continued.

“I don’t think it will shift team selection too much. We’ve picked a pretty powerful batting line-up, and we’ve got bowlers that we think in certain conditions against certain opposition can do the job. So we feel as though we’re pretty well covered for the options we have.”

Even if Australia win their two remaining games heavily, that may not be enough given England and Sri Lanka play last in this group, handing them a potential advantage. But that scenario is some way off still.

“It depends on England and New Zealand really, doesn’t it?” McDonald said.

All eyes will be on England v New Zealand in Brisbane on Tuesday. 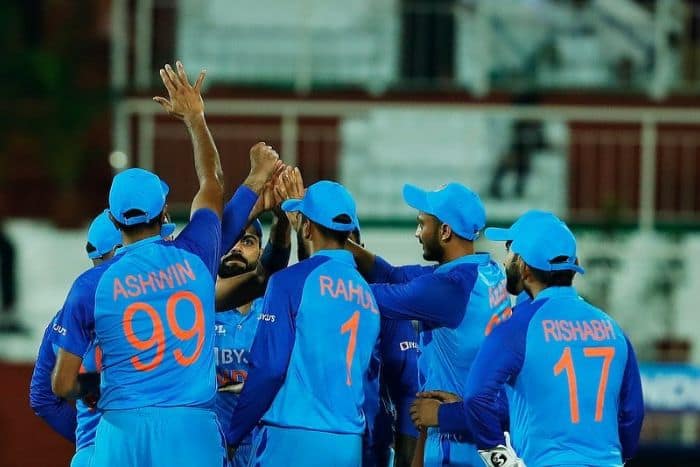 'I Requested Babar But.....'- Wasim Akram Spills The Beans Regarding Pakistan Captain