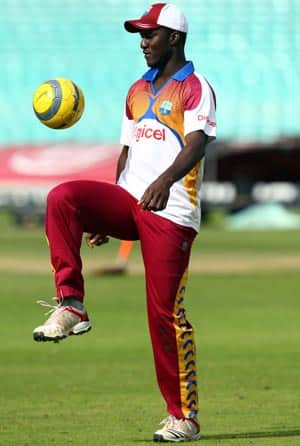 Sammy and the rest of the West Indies side minus five players taking part in the Champions League Twenty20 with Trinidad & Tobago arrived at the Hazrat Shahjalal International Airport in the Bangladesh capital Tuesday.

“Playing Bangladesh at home is always tough, as New Zealand found out the last time they were here,” said Sammy.

“An important factor for us will be how well we play spin. That will pose our biggest challenge.”

He added: “Also, our batting has to come to the fore (because) in the last series (against India), until the last Test in Dominica, our batsmen didn’t really dominate.

“These are the two areas we will definitely have to improve on.”

The West Indies will start the tour Oct 7 with the first of two warm-up matches in Fatullah, followed by a solitary Twenty20 Oct 11, three ODIs Oct 13, 15 and 18 and two Tests from Oct 21 to 25 and October 29 to Nov 2 before their departure Nov 3 for India.

Sammy also hailed the training camp which the side held in Dubai at the ICC Global Cricket Academy before travelling to Bangladesh.

“The sign (at the Academy) says ‘A centre of excellence for cricket’ and it is, indeed, that,” he said.

“The facilities were wonderful and I think every cricketer who gets an opportunity to use them would be very appreciative.”

He said: “You can get whatever you want there, in the indoor facility (there are pitches for) spin, pace, and there are the bowling machines. It was a great way to prepare before a tour.” (IANS)