Former skipper Ricky Ponting believes Australia played their worst cricket in the most critical moments of the ongoing World Cup.

Former skipper Ricky Ponting believes Australia played their worst cricket in the most critical moments of the ongoing World Cup.

Australia failed to make it to the final after suffering an eight-wicket thrashing against England in the semi-final on Thursday in Birmingham. Before the semi-final, Australia had also lost their last league game against South Africa and finished at the second spot in the points table after the group stage.

“Unusually for Australian teams in World Cups, we played our worst cricket in the most critical moments,” Ponting told Cricket.com.au. “That’ll be the thing that gets spoken about the most and see if there’s any reason behind it,” he added.

Ponting, hired as an assistant coach to Justin Langer for Australia’s World Cup campaign, however, said that the Aaron Finch-led side didn’t go wrong when it came to tactics.

“Tactically, I think we got things right. Personnel-wise, we picked the best team that we could for every game,” said the two-time World Cup-winning captain.

England will aim to win their first World Cup trophy when they face New Zealand in Sunday’s final at Lord’s. If they are able to win the coveted trophy, then according to Ponting, England will carry that momentum into the Ashes series.

“It probably does, to be honest,” Ponting said, when asked whether England’s 50-over success could spill over. “The country will be on a bit of a wave and a bit of a high, the players will certainly be on a huge high after that World Cup. But who knows if they don’t (win), it might have an adverse effect on their Ashes campaign as well. But I’m sure if they happen to win the World Cup, they’ll take as much as they can from it going into the Ashes,” he added. 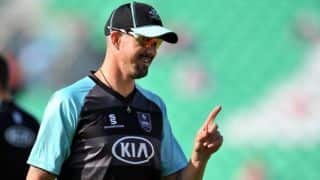