Zimbabwe overcame two early setbacks, set themselves up for a huge total, lost some steam during the middle overs, and yet recovered to post a formidable 298 against Canada. 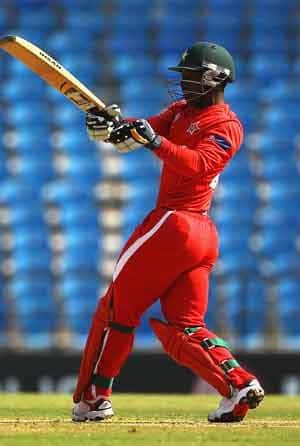 Zimbabwe overcame two early setbacks, set themselves up for a huge total, lost some steam during the middle overs, and yet recovered to post a formidable 298 against Canada.

They owed much to Tatenda Taibu and Craig Ervine, whose 181-run third wicket partnership in 27.1 overs formed the crux of their total, as well as to an eighth-wicket stand that prevented Canada from running riot. Canada were mediocre in the field at times, and will feel let down that they didn t stamp their authority after two key junctures.

Zimbabwe s start was far from positive. Brendan Taylor, one of their most dependable bats, fell off the first ball of the match to Khurram Chohan and Charles Coventry didn t last long either, out in the same manner for four to Harvir Baidwan. From seven for two, life was breathed back into the Zimbabwean innings by Taibu and Ervine.

The way the pair batted, it seemed the two early wickers were an aberration. Ervine drove and cut crisply; Taibu shuffled around and threw the bowlers off their lines. The first sign of spin was greeted by Taibu driving and sweeping delicately, and he repeated the dosage to Jimmy Hansra in his second over. Rizwan Cheema s slow offerings were equal fodder for Taibu, who collected two boundaries off him in the 15th over to ease past his fifty.

After a duck against Australia, Ervine made full use of the early over fielding restrictions with a clever combination of improvised deflections and brute force. He used his crease well, often turning good deliveries into hittable ones. Against the faster men, Ervine stood firm and drove hard on the rise and against spin he charged and swept very well.

With the pair going along briskly, 45 runs came between overs 20-25. Both implemented the sweep well and a flurry of boundaries kept the scoring rate very healthy. Zimbabwe looked set for a stratospheric score at the mid-way point of their innings, but Canada struck back through their spinners.

Against the run of play, Ervine was caught behind off an inside edge against Balaji Rao and from 188 for two, Zimbabwe slipped to 219 for six. Elton Chigumbura went for five, well taken by Ashish Bagai off Cheema, Taibu, on 98, slogged Rao the deep, and Greg Lamb s attempt to cut the same bowler resulted in an inside edge.

In his penultimate over, Rao snared a fourth as Sean Williams attempt to paddle one nestled in Bagai s gloves (240 for 7). Canada had a real chance to crush Zimbabwe, but took their feet off the gas. The key for Zimbabwe now was to stick it out and not try anything fancy.

That s what Prosper Utseya and Graeme Cremer did, briefly, before opening up with deft paddles and flicks to add 41 in six overs. The innings ended as it had begun, with wickets falling in a heap, but Zimbabwe will believe they have enough to put it over Canada.