Support from NZCPA chief Heath Mills was instrumental to the allrounder's turnaround in form.

Jimmy Neesham, the New Zealand allrounder, has revealed how he was coaxed out of retirement last year and urged to channel his talent into making the Black Caps squads.

During a difficult season in which he lost his place in New Zealand’s limited-overs squads and struggled for form on the domestic circuit, a frustrated Neesham called Heath Mills, the head of the New Zealand Cricket Players Association, to inform of his decision to retire.

Mills saw things differently and advised Neesham to take a break from cricket in January 2018; when he returned, Neesham completed the 2017-18 domestic season with Otago Volts and then joined Wellington where his form returned and he was recalled to New Zealand’s ODI squad late last year.

Now, after all-round success in a handful of matches, Neesham is headed to England for his first World Cup.

After being named in New Zealand’s 15-man squad, Neesham thanks Mills for his support.

“He convinced me to take a little break and come back three or four weeks later and obviously from there I’ve been able to make progress steadily and come back into the fold with Wellington and make this team as well and it’s been a surreal rise, I guess,” said the 28-year-old.

“He basically told me to go home, have a couple of weeks off, not pick up a cricket bat, and see how I felt in a fortnight or so and we’d gradually talk about getting back into the game again. When I did go back to Otago, I didn’t want to. I wanted to have another week or so off, but he convinced me the best way to get back on the bike is to just get back on and see how you go. (READ: New Zealand’s World Cup squad: What we’ve learned)

“The end of that season was a little bit better and the next season after a six-month break was better again.”

Neesham was dropped from New Zealand’s ODI squad after the 2017 ICC Champions Trophy after managing a solitary half-century in 11 ODIs that year and only four wickets, and returned to domestic cricket with too many thoughts in his head.

This impacted his performance, and he sought out Auckland-based psychologist Paula Dennan to understand why he was getting frustrated.

“I wanted to dominate domestic cricket and wanted to score hundreds every game and once that starts going in a downward spiral and you’re not going well and you’re not scoring runs, you put more pressure on yourself,” said Neesham. “I’m not much of a communicator at the best of times, I’m not sure many New Zealand blokes are, and just being able to talk through a few of the struggles I was having off the field [was good]. It only took five or six sessions to really start to see some progress and feel confident going back onto the field again.

“Waking up in the morning and opening the shades, hoping it was raining is not the ideal way to be starting a day of cricket and I think I got to the point where I needed to have a full overhaul of the way I was approaching the game and she facilitated that.”

Neesham forced his way back into the reckoning with a successful 2018-19 Ford Trophy followed by two games for New Zealand A versus India A in December. He finished as the second-highest run-getter of the Ford Trophy with 503 from 11 innings at an average of 71 and strike-rate of 110.79, with two hundreds the only of his List A career and three fifties. His seam bowling fetched him 13 wickets at an economy of 5.81.

In five innings since he returned to New Zealand s ODI squad in January, Neesham has 204 runs at a strike-rate of 182.14 which includes six sixes in an over on comeback and claimed 10 wickets at 22.90 with an economy rate of 5.38. 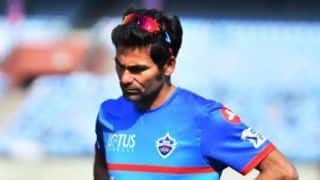