The post-tea session saw more crackers from the Bangladesh openers.

Minnows, Bangladesh put on a commendable performance as they finished on top against Pakistan on Day 4 of the first Test of the two-match Test series, at Sheikh Abu Naser Stadium in Khulna on Friday. Both openers, in the form of Tamim Iqbal and Imrul Kayes put on a whopping and record 273-run stand as they trail by 23 runs in the second innings. LIVE Scorecard: Bangladesh vs Pakistan 2015, 1st Test at Khulna, Day 4

Earlier, Pakistan started the day with the score of 537 for the loss of five, as Asad Shafiq and Sarfraz Ahmed continued after scoring their respective half-centuries on Day 3. However, Bangladesh bowlers bounced back and kept claiming wickets s a result they were bowled out for 628, with a healthy lead of 296. Taijul Islam claimed six wickets for 163. Bangladesh began their innings and finished with six for no loss in four overs, with openers, Tamim and Imrul starting proceedings for second innings, as the lunch break kicked in.

The post-lunch session saw the openers continue their proceeding. Both put-up the opening 50-run stand, as Tamim scored his 18th Test half-century in 63 deliveries including seven boundaries. They also managed to put up the 100-run stand, and just before the tea-break kicked in, Imrul scored his third Test half-century off 80 balls with seven boundaries and a six. LIVE Updates: Bangladesh vs Pakistan, 1st Test, Day 4 at Khulna

The post-tea session saw more crackers from the Bangladesh openers as they continued to dominate Pakistan bowlers. Both put-up the 150-run stand, eventually as they played big strokes and dealt especially in boundaries. Tamim quickly scored his seventh Test century, with 11 fours and three sixes in 123 deliveries. It was followed by a 200-run stand, following which, Imrul too scored his third Test century in a similar fashion as that of Tamim, only to face more deliveries than him.

Bangladesh finished on 273 for no loss, as they now trail just by 23 runs. Pakistan bowlers just failed to click and few close calls just didn’t go their way as the DRS too couldn’t help them. 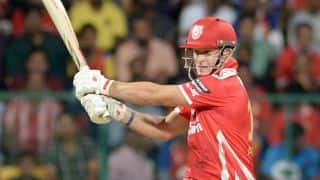