Tamim Iqbal hit a half-century as Bangladesh reached 165-3 in their first innings at tea on the opening day of the first Test against the West Indies on Friday. 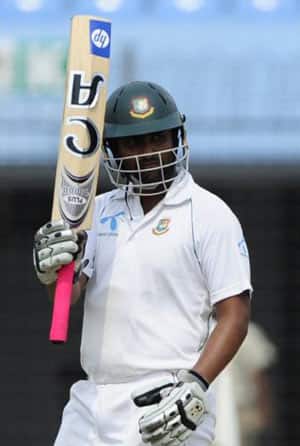 Tamim Iqbal hit a half-century as Bangladesh reached 165-3 in their first innings at tea on the opening day of the first Test against the West Indies on Friday.

The left-handed opener (52) batted patiently for more than a session before falling to a loose shot, caught by teenager Kraigg Brathwaite at mid-wicket while attempting to slog-sweep part-time spinner Marlon Samuels.

He cracked five fours in his 141-ball knock for his ninth half-century in 21 Test matches.

The West Indies got one more wicket in the afternoon session when seamer Darren Sammy trapped Raqibul Hasan leg-before. Raqibul, returning to the Test side after more than a year, scored a 92-ball 41 with three fours.

Skipper Mushfiqur Rahim was batting on 26 at the break with former captain Shakib Al Hasan, who had yet to open his account.

Bangladesh batted steadily after winning the toss on a good pitch, scoring 74 runs in the first session and 91 in the second.

Shahriar Nafees retired with a bleeding nose in the opening session after being struck by a bouncer from paceman Fidel Edwards in the 20th over.

Bangladesh lost opener Imrul Kayes in the 12th over before being steadied by Tamim, who had put on 32 runs for the second wicket with Nafees.

Fast bowler Ravi Rampaul struck in his sixth over when he had Kayes caught by wicket-keeper Carlton Baugh.

Nafees played some attacking shots early in his innings, hitting Sammy for two successive fours and then smashing Edwards for two boundaries in an over.

All-rounders Elias Sunny and Nasir Hossain made their Test debuts for Bangladesh. (AFP)