Bangladesh opener Tamim Iqbal scored his maiden century in Twenty20 International (T20I), against Oman in Group A Round 1, Match 12 of the ICC World T20 2016 at the Himachal Pradesh Cricket Association Stadium (HPCA) Stadium in Dharamsala on Sunday. His ton came off 60 deliveries, including 10 boundaries and five sixes, along with a strike rate of 163. He also became the first Bangladeshi to score a ton in the mega event and also in T20Is. Currently, Bangladesh are 180 for the loss of two wickets in 20 overs, with the opener Tamim Iqbal on 103 and Shakib Al Hasan on 70. Earlier, Oman skipper Sultan Ahmed won the toss and elected to bowl first, as both the teams went with an unchanged squad from their previous game, as they are coming off a win as well, and look to repeat the same tonight again. Full Cricket Scorecard: Bangladesh vs Oman, ICC World T20 2016, Group A match at Dharmasala

The winner of this match will take on Australia in their first Super-10 match at M Chinnaswamy Stadium in Bengaluru. This is Oman s debut in the ICC World T20 and it will be gigantic step in their brief cricketing history if they manage to win this match and qualify for the Super-10s. 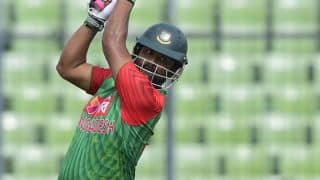 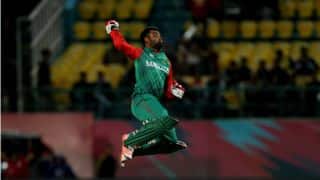