Tamim Iqbal, Sabbir Rahman and Shakib Al Hasan, stared with the bat as Bangladesh end up making 324 for 5 against Sri Lanka in the 1st ODI at Dambulla.

Winning a crucial toss, Sri Lanka asked Bangladesh to bat first on a dry wicket at Dambulla in the first One-Day International (ODI). Tamim Iqbal, Sabbir Rahman and Shakib Al Hasan starred with the bat for the visitors. All three batsmen constructed big stands amidst personal milestones that saw Bangladesh end up making 324 for 5 in 50 overs. Sri Lanka’s bowling, on the other hand, was lacklustre and dull to say the least with Suranga Lakmal returning with the figures of 2 for 45. This three-ODI series follows a hard-fought Test series, which ended one-all. LIVE CRICKET SCORECARD: Sri Lanka vs Bangladesh, 1st ODI

Tamim and Soumya Sarkar opened the innings for Bangladesh. The pair gave their side a steady start before Sarkar’s stay ended. He poked at a wide ball from Lakmal and perished after giving a catch to the wicketkeeper. Tamim, meanwhile, became the first Bangladesh batsman to cross 10,000 international runs. Sabbir continued his good form with the bat, cashing in with three boundaries against Thisara Perera in his first over.

The pair quickly reached their 50-run stand in just 48 balls, with Sabbir doing most of the scoring. Sabbir recorded his fourth ODI half-century in 48 deliveries. However, he fell soon after reaching his milestone, with Asela Gunaratne striking in his first over, getting Sabbir for 54. Sabbir, looking to drive the ball on the rise, was caught spectacularly by Upul Tharanga at short extra cover who showed athleticism in grabbing the ball. Mushfiqur Rahim could not do much as he gave a simple return catch to Lakshan Sandakan for just 1. Shakib came out at No.5 to partner Tamim.

Soon, Tamim reached his 35th ODI half-century in 76 balls. Sloppy fielding and poor bowling saw Shakib along with Tamim race away with their 50-run partnership in just 54 balls. Tamim stroked his way to his eighth ODI ton in 127 balls that included 12 fours.  Shakib followed suit with his 33rd ODI fifty in 61 balls, which was his fourth against Sri Lanka.

The final overs saw carnage by Tamim and Shakib as the pair ended up adding 144 runs for the fourth wicket. Shakib, trying to be aggressive, gave a simple catch to Sandakan at third-man for a 71-ball 72 off Lakmal.

Tamim cashed-in on some poor bowling by Perera and co. in the death overs before handing his wicket to Lahiru Kumara. Tamim, trying to hit big, gave a simple catch to Gunaratne for 127 after being dropped on the previous delivery. Tamim’s score of 127 is now the highest score for any batsman in ODI cricket at Dambulla.

Mosaddek Hossain sneaked-in with a 9-ball 24, while Mahmudullah remained unbeaten on 13 . 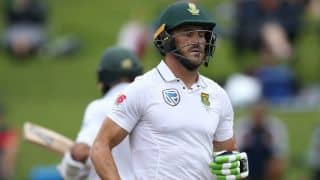