They came agonisingly close to clinching their first Asia Cup title before losing to Pakistan by just two runs and Bangladesh skipper said it was the wickets of Tamim Iqbal and Shakib-Al-Hasan that proved to be the turning point of the final. 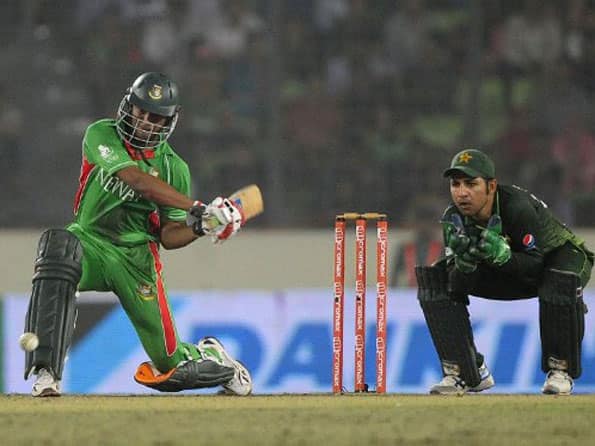 Man of the series, Shakib Al Hasan took pride in their performance and said Bangladesh would take positive from the Asia Cup AFP

They came agonisingly close to clinching their first Asia Cup title before losing to Pakistan by just two runs and Bangladesh skipper said it was the wickets of Tamim Iqbal and Shakib-Al-Hasan that proved to be the turning point of the final.

Bangladesh has played brilliant cricket in the Asia Cup, beating India and Sri Lanka and even today they restricted Pakistan to 236 and were in the hunt before succumbing to a 2-run defeat at the Shere Bangla National Stadium here.

“Before the tournament, we had great preparation but the boys stuck to the plans. We played good in the tournament I thought. But the wickets of Shakib and Tamim were the turning point tonight,” Rahim said after the match.

“The wicket is a bit slowish, it’s not easy to score runs, Tamim and Shakib played well. We gave away some runs in the last over, that was crucial.

“It’s been a great tournament for Shakib, Tamim, Mashrafe, Razzak and Nasir. We fought in all the games and we achieved a lot in this tournament,” said Rahim, who signed off by promising the crowd a better performance in future.

Man of the series, Shakib Al Hasan also took pride in their performance and said they would take positive from this tourmanent.

“If we look at the overall tournament, we were terrific.

The teamwork has been terrific, the way the crowd supported us was fantastic too. Hopefully we’ll kick on from here,” Shakib said.

“If I had scored two more runs we would have won the game, we came so close to win the Asia Cup. We’ll take the positives from this series and move on from there.”

Pakistan clinched the Asia Cup title after 12 years and skipper Misbah-ul-Haq credited the youngsters for setting up the victory for the team.

“Wonderful victory, well fought by all guys, the youngsters came in and contributed well. Hammad Azam played well, Sarfraz’s innings was a vital one for us. It was a good team effort,” he said.

“This wicket was a little different from the other ones, it was slow. We were hoping that around 225-230 would be a fighting a score. The spinners bowled very well, the pacers did well in the end,” he added.

Even though heart-broken after there narrow defeat, Bangladesh won hearts with Misbah and former skipper Shahid Afridi heaping praise on the team for their “awesome” performance in the four-nation tournament.

“Bangladesh played wonderfully well, this is really a new Bangladesh team and they are really the winners,” said Misbah.

Afridi, who won the man of the match award for his 32-run innings and a wicket, said: “Bangladesh really played well, they played awesome cricket. They always surprise and give a tough time to the top teams. The credit goes to guys like Shakib and Nasir, they really played some good cricket.

Asked about his own performance, he said, “I worked hard on my bowling. I tried my level best with the bat. I was focussing on my game and I really worked hard.”(PTI)