Taniya s shot to fame was at the age of 13 when she became the youngest cricketer to play for the senior Punjab team in the inter-state domestic tournament in 2011.

India Women squad for South Africa tour was announced on Wednesday evening with three uncapped players included in the side: Jemimah Rodrigues, Taniya Bhatia and Pooja Vastrakar. Jemimah already expressed her happiness, to CricketCountry, of playing for Indian Eves. However, it was nothing less than a fairytale for Taniya as well. Taniya s shot to fame was at the age of 13 when she became the youngest cricketer to play for the senior Punjab team in the inter-state domestic tournament in 2011. Taniya has also had the opportunity to train under Yuvraj Singh s father Yograj at DAV Senior Secondary School.

Taniya has had impressive domestic records before being selected for the India Women. She has captained the U-19 North Zone side in the inter-zonal tournament at Guwahati in 2015. She scored 227 runs and even accounted for 10 dismissals. She was also one of the probables for the 2017 Women s World Cup. Before playing the A series against Bangladesh, Taniya scored three fifties in the U-23 tournament. Harmanpreet Kaur has found a partner from her state. The duo have played together for India Green and their state Punjab.

Taniya is delighted to be selected and is determined to make the most of the opportunity provided. She also mentioned to Indian Express how the U-23 and India A tournaments boosted her confidence.

It s a new start for me

It s a new start for me as I was eagerly waiting for this opportunity for a long time. I had some good seasons earlier but had a low patch in between and missed the Indian team for last year s World Cup. But being in the probables camp for the World Cup helped my game a lot. Sushma didi is the main wicket-keeper in the team and if I get a chance, I will aim to perform to my best. South Africa has bouncy pitches and the ball comes hard on the bat. So, I need to practise keeping in mind the conditions in South Africa. We will have a training camp, too, and I will aim for a good performance in the Indian colours.

The three half-centuries in the U-23 inter-zonal tournament boosted my confidence. Playing against the Bangladesh A side also helped my game. Although I will be playing under Mithali Raj and Harmanpreet didi in the Indian team for the first time, I have played with them before. Harmanpreet didi used to tell me that I will come into the Indian team one day and also told me to concentrate on my batting. Punjab coach RP Singh sir also helped me a lot. 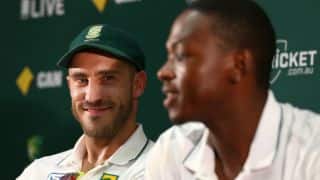