JP Duminy and Hashim Amla were at the crease as the players headed for Tea on Day One.

South Africa built up a strong position on the first day of the series-deciding second Test against New Zealandon Saturday despite some good bowling by the visitors. South Africa were 182 for two at tea after losing opening batsmen Quinton de Kock and Stephen Cook, who put on 133 for the first wicket after New Zealand decided to bowl first. De Kock made 82 off 114 balls before hooking Neil Wagner to Trent Boult on the fine leg boundary, while Cook made a patient 56 off 143 deliveries before falling to a low catch by New Zealand captain Kane Williamson at gully off Doug Bracewell. FULL CRICKET SCORECARD: South Africa vs New Zealand, 2nd Test at Centurion

Hashim Amla, who was 24 not out at tea, was given out leg before wicket to Trent Boult by umpire Ian Gould when he had 17 but a successful review by the batsman showed the ball was narrowly missing his leg stump.

De Kock, the South African wicketkeeper, was moved up to open the batting which he does regularly in limited overs internationals after regular opener Dean Elgar sprained an ankle during fielding practice on Friday. Stiaan van Zyl came into the side and was expected to bat at number seven.

The combination of the watchful Cook and the more free-flowing De Kock enabled South Africa to reach 100 for no wicket at lunch.

It was South Africa’s first Test century opening partnership since December 2013. And it was indicative of the difficulty of batting first in South Africa that it was the first time since March 2009 that any team had reached three figures without losing a wicket before lunch on the first day of a Test. That 2009 honour  went to Simon Katich and the late Phillip Hughes for Australia.

New Zealand fought back after lunch, however, restricting South African to 82 runs in 26 overs between lunch and tea, for the loss of two wickets with Wagner bowling an impressive spell of nine overs, conceding 17 runs and dismissing De Kock. 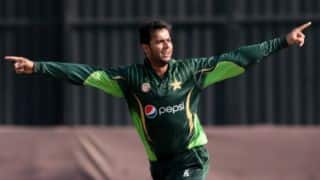