Anil Kumble's contract as head coach will end post-India's campaign at the Champions Trophy and the BCCI has already invited applications for the position.

The Indian cricket team is likely to get its next head coach before the end of the ongoing Champions Trophy in England and Wales, i.e. June 18. Current head coach Anil Kumble has officially re-applied for the post-this coming despite the Board of Control for Cricket in India (BCCI) saying that there was no need for the legendary leg-spinner to file a formal application as he would be a “direct entry” into a final pool. Kumble’s contract as head coach will end post-India’s campaign at the Champions Trophy and the BCCI has already invited applications for the position.

Apart from Kumble, Virender Sehwag, Tom Moody, Richard Pybus, Lalchand Rajput, and Dodda Ganesh have applied for the post of India’s head coach-who all will be interviewed by Cricket Advisory Committee (CAC), which consists of Sachin Tendulkar, Sourav Ganguly and VVS Laxman. Former Australian fast bowler Craig McDermott had also sent an application but that arrived after the May 31 deadline. The three-member CAC will assess the application and determine his eligibility for the interview.

It is expected that the CAC is likely to meet this week to finalise the process and interview schedule, reports ESPNcricinfo. The BCCI wants to identify a candidate before the Champions Trophy ends on June 18, as India travel to the Caribbean immediately after for a limited-overs series.

It was understood that BCCI’s fresh application for the post of head coach was because the board was concerned by player feedback on Kumble, with some of the players, including skipper Virat Kohli, have reportedly said they were uncomfortable with the “intimidating” style of Kumble’s man management.

However, despite all this, Kumble’s application was one of the first to arrive when the application process opened on May 25. Along with his CV, the legendary leg-spinner has sent a detailed roadmap outlining his vision for the future of the team.

It is expected that the new head-coach will get a two-year contract with the 2019 World Cup as a main target. Kumble had a successful year-long stint with the Kohli-led team and his tenure will conclude with the ongoing Champions Trophy in England.

Last year, the BCCI had advertised for the head coach’s position for the first time. While Ravi Shastri was the top contender for the role, Kumble bagged the job.

In 17 Tests, Kumble saw India win a dozen, drawing four and losing just one against Australia. India even retained the number one stop in Test ranking under Kumble’s term. 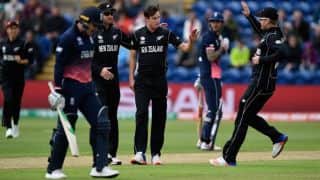