During the last Test series, there were talks about too much Indian food being on the buffet menu.

The touring Indian cricket team will not get their favourite food, when their tour of Australia begins from late November for a four-match Test series. The first Test starts at Brisbane on December 4 and the Indians won’t have their food served from Gogo’s Madras Curry House in Perth.

According to Sydney Morning Herald, with no Test match being scheduled at the Western Australia Cricket Association (WACA) Ground in Perth, it is very unlikely that the local chef Gogo Govardhan would serve the food to the Indians as he has done so in the last 10 years.

Whenever India toured Australia, Gogo Govardhan has been the team’s chef for the last 10 years and has travelled with the cricket team throughout Australia. Govardhan even sent his famous lamb chops to Mumbai for a party organised for Sachin Tendulkar.

During the last Test series Down Under in 2011-12, there were talks about too much Indian food being on the buffet menu for both Indian and Australian players, as the home side’s cricketers are also big fans of the Indian chef. At times, the Indian food has been more preferred over the Western in these buffets. 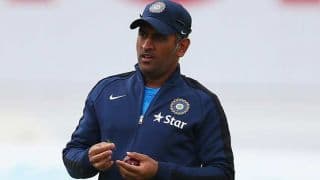